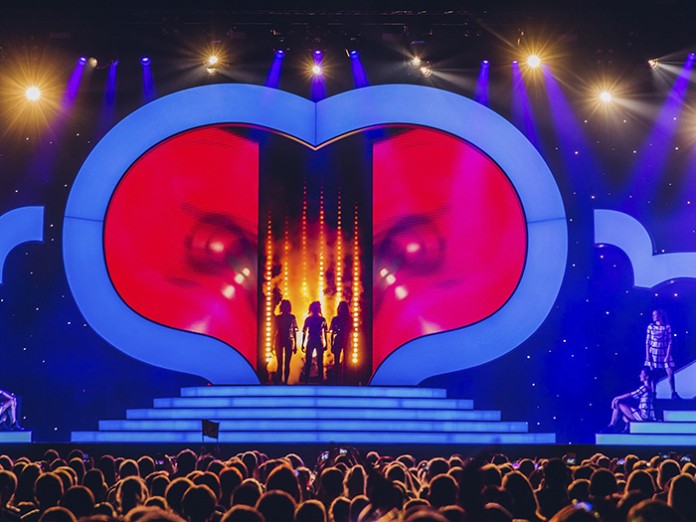 Luc Peumans of Belgium’s Painting With Light created the captivating light show. Having worked with ‘Belgium’s answer to the Spice Girls’ for the last decade, Peumans took pride in designing a show that captured the upbeat spirit and high-octane energy level of the beloved girl group.

“During the 10 years in which Painting With Light has worked with K3, one thing has always remained consistent,” commented Peumans. “From their songs to their live performances, the band has always tried to be as innovative as possible. This is something which we have also tried to push forward with our K3 lighting designs.”

With this goal in mind, Peumans selected 25 Chauvet Professional Strike 4 100W LED fixtures to award the K3 stage show with a mix of warm-white wash, audience blinder and strobe. Positioned all over the overhead trusses facing the audience, the Strike 4’s served several purposes.

“The Strikes replaced my traditional blinder fixtures,” said Peumans. “As the girls have a lot of interaction with the audience during the performance, the Strike 4’s provide perfect audience blinding when required.”

While the Strike 4’s blinder capabilities were used to great effect during the show, the fixture’s other features also played a prominent role. “[It] gives a lot of extra possibilities over conventional audience blinders,” said Peumans. “They create an extra dimension to the overall look of the stage, giving a retro stadium rock aura, thanks to the smooth dimming curve.”

“The fact that each cell can be controlled individually gives a lot of options in terms of lighting design,” continued the LD. “I also like using the Strike’s strobe feature. There are plenty of different looks to play with.”

Peumans’ decision to put the Strike 4 at the core of his lighting design was central to the overall look of the K3 farewell tour. “The Strikes played such an important role in my lighting concept for the farewell tour, not only because of the fact that they performed as wash, blinder and strobe,” concluded Peumans. “Their versatility helped us to achieve the kind of visual send-off the band deserves.”