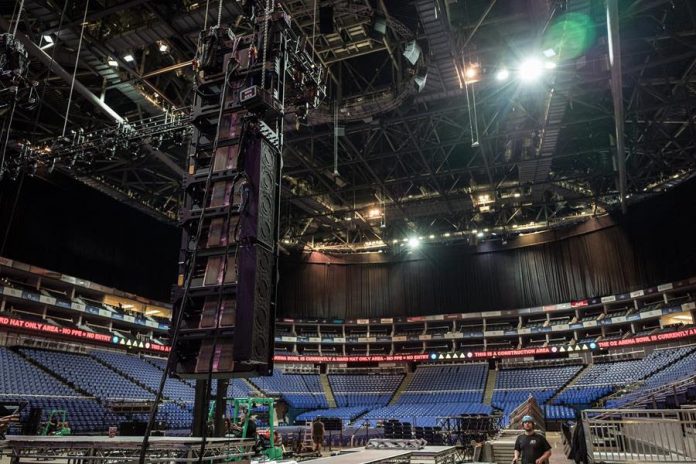 Setting a new precedent for touring sound in one of the world’s most famous venues, the flagship Firenze KH8 touring system from Italian innovator K-array recently covered London’s O2 with a core front of house set-up of just nine KH8 panels per-side.

Marking the first opportunity for Firenze to prove itself in such a prestigious setting, the event was described by Sam Nankivell, of UK K-array distributor 2B Heard, as “representing change in the industry, in one of the most iconic live performance venues in the world, where systems are tried and tested. There’s no better place for Firenze to prove that it belongs at this level.”

The Firenze system arrived at the O2 as part of a 10-date UK arena tour by street dance troupe Diversity, staged by Production North with Audiotech Services supplying the audio and video rigs. Upon arrival at the O2, the K-array system immediately impressed local crewmembers more used to a longer, more challenging set up.

It’s a lot quicker to rig than we’re used to,” enthused Stage Miracles local crewmember, John Cuckston, who aided in flying the straight hangs of KH8 panels – a significant health and safety benefit for local crewmembers. His colleague, Joe Hales, added, “It took maybe 10 minutes to get out of the truck and then 10 minutes to fly – it’s brilliant!”

The K-array Firenze system was used throughout the tour, taking in arenas including Glasgow’s SSE Hydro, Nottingham’s Motorpoint Arena, the Manchester Arena, Birmingham’s Barclaycard Arena and more. But it was at the O2 that the Firenze system – compact enough to occupy less than half of a truck for the entire tour – demonstrated its ability to confound expectations and impress in a world-class arena.

“The last time I mixed front of house in the O2, I was running 18 boxes per-side,” said Diversity front of house engineer, Christian Lewis. “This arena sized system is occupying less than half of an artic. It sounds as good as any other system I’ve used. In fact because of the shallow box design the response is instant and there’s plenty of top end. It’s all there.” Indeed, regardless of volume, the dynamics remain constant.

The Firenze KH8 dismisses the limitations of older, larger touring solutions. Based on an innovative flat panel design that enables optimum directivity via digital acoustic steering, each self-powered IP45-rated enclosure houses 16 neodymium transducers (8 8-inch for LF, 8 4-inch for MF and four 1.4-inch high frequency compression drivers). Panels are anchored in pre-cabled groups of three for extremely fast rigging and deployment, while entire systems are flown in a straight line, with the option to precisely tilt panels as required.

On-board each panel is an IP65-rated electronics module delivering eight channels of Powersoft DSP and amplification, utilising the Armonia platform for system EQ and control, and providing 2,000W of power on each output. System optimisation to suit the venue can be achieved in minutes using AFMG’s EASE Focus software, which also forms the control interface for the creation of all required FIR algorithms, ensuring quick and simple operation over a single, trusted platform. Additionally, all of the Powersoft amplifier modules are IP addressable, enabling quick and seamless configuration updates.

The combination of all of the above is named Slim Array Technology (SAT) – quick to deploy, virtually invisible when flown, yet powerful enough to meet even the most challenging of environments.

For Diversity at the O2, for which the upper balcony of the arena was blocked, the system comprised nine KH8 panels per-side plus side-hangs of two per-side KH7 elements, each containing four 12-inch coaxial drivers with rotating waveguides. On stage, two side-fills were based on portable KR802 systems, while eight hard to spot KH2 panels lined the lip of the stage for front fills. A total of 12 IP65-rated KS8 subs provided low frequency support on the ground. Had the full arena been in use, only a further three KH8 panels per-side would have been required. A DiGiCo SD9 was used for both front of house and monitors.

At front of house during set-up was System Tech Sergey Becker. “The nine KH8 panels per side are all progressively down-tilted at 2-degrees, but the angling only provides minimal adjustment – regardless of how the system is deployed, the software will sort out the coverage,” he explained. “In terms of the venue’s acoustic challenges, the system minimises reflections and gives a lot of direct sound, and that helps a lot. But I think the biggest advantage is the system’s physical size and the ease of rigging, which is amazing. It’s all pre-cabled and I can actually fly it on my own. It’s impressive, the size and the power you get out of it.”