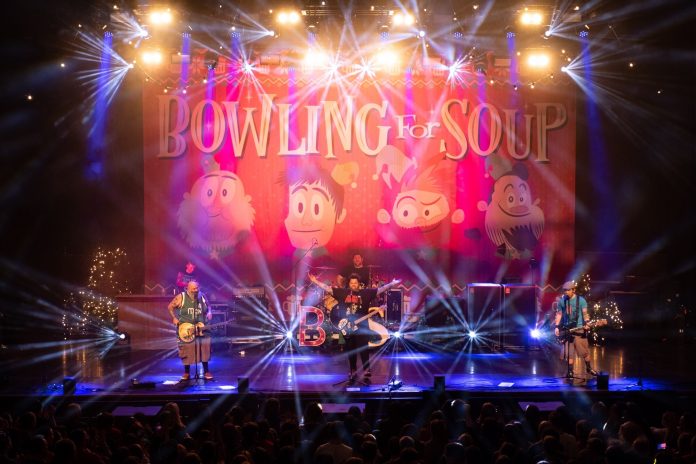 UK-based Lighting Designer Jon Smith has worked for the last seven years with one of the more humorous pop-punk bands around, Bowling for Soup. In late November 2018 and early December, the band played a string of festive UK gigs dubbed the Almost Christmas tour with Jon using an Elation lighting rig to light the shows.

This run was a bit different for the LD however, as his own company, JSES LTD, founded in 2017, provided all the lighting, truss, crew, operation and special effects. As a much sought after lighting and special FX production company, JSES is growing rapidly. “My company has only been operational for two years and I have gone from a freelancer with a desk to a large operation that’s expanding all over the world,” Jon stated. ”We’re running fast to keep up with the workload and the exciting clients we are working with.” Those clients include names such as Drake, Giggs, Gareth Malone and Zebrahead.

For the “Almost Christmas” tour the LD employed DARTZ 360 beam/spot effects, Satura Spot LED Pro moving heads, Proton 3K LED strobes, Paladin hybrid effect lights and Cuepix Blinder WW2s to complement a string of high-energy numbers from a band who clearly still has what it takes. “We played cities the band doesn’t usually visit in the UK but still every show was busy,” said Jon, who also served as lighting operator and production manager on the tour.

He described the design’s three-truss set up as fairly basic with front light and two trusses of strobes, blinders, washes and beams. “The music is very fast-paced so the design needed simple factors – speed and energy,” he said, adding that the DARTZ worked from mid- and back-truss with six on the floor to give depth to the stage. “The DARTZ were the key wow factor in the design. We used them to create different looks and they were key to the energy behind the music,” he said while naming the double overlapping prisms and dimming ability as reasons why he was sold on the fixture.

The designer used Elation Satura Spots for front light and specials on the band, and because the group is known for engaging with the crowd and likes to see their audience, he used the Protron strobes and Cuepix blinders mainly for audience participation. The Paladin fixtures, a multi-functional LED blinder/strobe/wash light with zoom, operated from the front as well as side stage and were used to light the festive-themed backdrop.

Jon said he was pleased with the tour and the performance of the lighting package. He also credited lighting technician Matt Arblaster and lighting and pyrotechnician Chris Nicholls for their hard work, part of what he says was quite a small team for the size of rig involved.