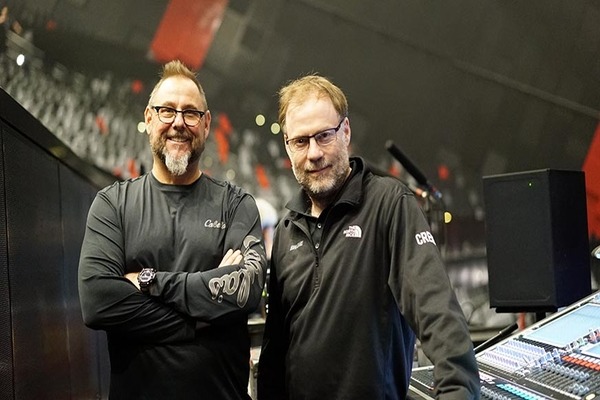 Ariana Grande brought her Dangerous Woman Tour to Australia during September 2017, and JPJ Audio joined her on the road, with help from a Clair Cohesion PA and FOH engineer Simon ‘Si’ Thomas.

Toby Francis, Grande’s usual FOH engineer, asked Si to replace him at the helm of the DiGiCo SD7 in May 2017. The Clair Cohesion PA was utilised during the entire tour, substituted by L-Acoustics K1 or d&b J series when the model was unavailable.

“It’s very compact and light weight compared to other line arrays in its class and it’s got lots of headroom,” commented Si. “It has a really good high/mid which is very smooth. With this kind of music there’s a lot of odd sub content that goes down really low with which the CP-218’s do a really good job. The CP-218 sub is particularly good and very powerful.

“I then have a Neve Portico 5059 Satellite 16×2+2 Summing Mixer and within that I’ve inserted various types of compression, Smart C2 for the drums, Crane Song STC-8 for the music, backing vocals a Tube-Tech SMC 2B multiband optical compressor and for Ariana’s vocal a Rupert Neve Shelford Channel,” explained Si.

“The various compressors are on the A Channel side of the Portico summing mixer, which are then all fed to the B side of the summing mixer to create a master mix which has a Portico II Master Buss compressor across it. Then that would then output and come back into the Master Buss return insert point of the SD7 with yet another Lake, converting to AES. Basically it’s a like one big insert chain,” he added.

Ariana uses a Sennheiser MD 5235 dynamic microphone capsule with a Lake inserted across her channel so all of her vocal EQ’s are done in the Lake and not the console. In fact a lot of the serious work is not done in the DiGiCo which is basically being used as a big router! The Digico channel expander was used on the vocal to keep the noise floor down so when Ariana is in front of the thrust and is not singing, you’re not hearing the room noise or PA.

Vish Wadi also used a DiGiCo SD7 to run monitors with everyone using Sennheiser 2050 IEMs plus there are flown sidefills, some CM-22 stage monitors on the floor for the dancers and CP-118’s providing sub onstage for the band.

“The Australian tour was good fun and we really enjoyed it,” concluded Si. “To be honest, it was quite easy partly due to my system tech Jerrell Evans and the JPJ crew of Tim Seconi and Alex McComark, who were good lads.”