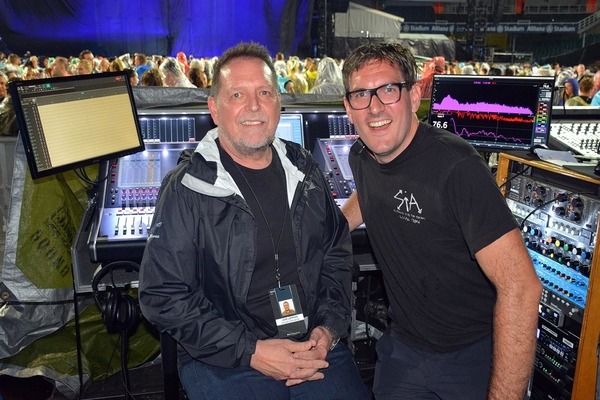 The FOH engineer has known SIA for most of her life and has been supporting her production since 2002. “It’s a very organised show,” said Lemon. “The biggest challenge was putting it all together in the first place as it’s mostly playback in terms of the music. The brief I had was to make it feel like it was live but also sound like the record with SIA then singing live on top of it.

“I see it a lot with hip hop and rap where it’s just the artist and a DJ with minimum number of stems and the engineer has just got nowhere to go and nuance it like the record. The environment changes the audio all the time, it might be a gig sucking out all the percussive stuff or over emphasizing the bass and you need control over all of those things.”

Lemon utilised a DiGiCo SD5 console with Waves Servers, Waves MaxxBass, Maag EQ4’s and Smart C2 compressors to control the sound. “SIA has a big voice so I use Waves Renaissance compressors as well as their 1176 limiters on her vocals as she is so dynamic,” Lemon explained. “It’s pretty dialed in and quite simple because we did a lot of the work beforehand, in this modern way of doing things.”

The DiGiCo SD5 houses nearly 50 inputs, all split up and presented like a live band. “A lot of people may think it’s complicated but I don’t because I have been so close to the music and the process of it,” elaborated Jon. “I know how she sings and I know how to ride it around to keep it level. As everything is so consistent we have a pretty good result most of the time. A lot of modern music is about the system engineer and how the company sets up the system. When I first started out, I was doing it all but realized a few years back that the complexities of these big venues, with networking, delays, and timing, is best left to someone else so I can concentrate on the art part of it. Of course, I oversee it all and will walk the room …. but on this tour, I have one of the best L-Acoustics system engineer and designers in the business which makes my life easier.”

System technician, Vic Wagner, alongside JPJ Audio’s Mats Frankle, ensured the L-Acoustics K1 / K2 PA was ready for action. Multiple delay towers and rings were required to cover the stadium and deliver maximum SPL possible without upsetting EPA. “The L-Acoustics K1 is a really reliable PA and sounds great,” added Lemon. “We had 2 main hangs, subs across the front, sides a mixture of K1 and K2 and then four K2 delay towers. It all worked perfectly.”

SIA has always used a trusty Shure SM58 microphone and according to Jon, she always will. “I’d like to change it but she is so used to using the SM58 dynamically its part of the way she sings,” he explained. “That’s why I use the Maag EQ4’s as analogue inserts because they have the airband on them which means you can actually make an SM58 sound like an expensive microphone!”