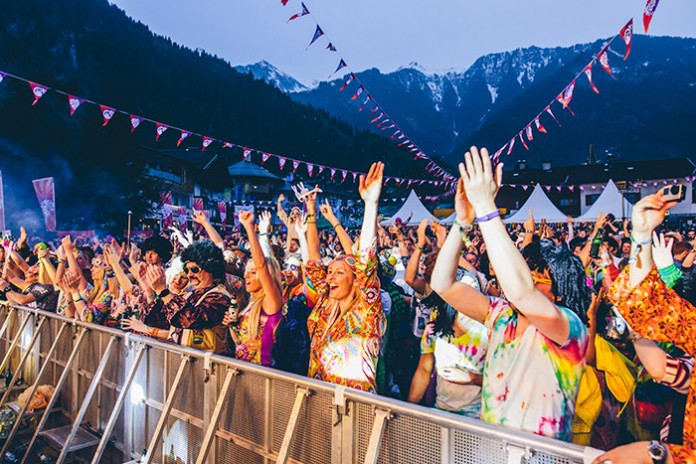 Dubbed ‘the greatest show on snow’, Snowbombing takes place in the Austrian town of Mayrhofen and welcomes over 6,000 festival-goers for a week of world-class music and snow sports. Following on from last year’s success of taking Snowbombing fully Cashless for the first time, Intellitix once again deployed a bespoke system across the entire festival site, which included installing the system’s antenna 1,500ft above Mayrhofen.

Intellitix’s RFID system was implemented across the festival’s main venues including Europahaus, Bruck ‘N Stadl, The Racket Club and The Arena to enable secure Cashless Payments and speed up transaction times at key locations with a simple double-tap of an RFID wristband. The team was also tasked with deploying its RFID technology to enable smoother Access Control and Cashless Payments at the festival’s temporary pop-up events including The Street Party and The Forest Party, which were set up and taken down while the festival was taking place.

Intellitix’s Head Pilot, Serge Grimaux, said: “Snowbombing recently won the ‘Best Overseas Festival’ at the UK Festival Awards and it’s great to see it making waves within the live events industry. We were thrilled to once again work alongside Broadwick Live to build on the success of last year’s festival and expand our RFID offerings to take Snowbombing Cashless for the second time. “Snowbombing is paving the way for the future of Cashless festivals and it is proof that RFID technology can work in even the most unusual of locations. The technology has integrated seamlessly into the Snowbombing experience and has seen a huge positive reaction from festival-goers not having to worry about carrying around currency. Snowbombing has been an industry leader in their use of RFID technology to enhance the festival experience for patrons and organisers, and we look forward to working alongside Broadwick Live in the future. I’m confident many other festivals will follow to adopt this Cashless Payment model.”

Ryan Esson production manager commented: “This is the second year that Snowbombing has utilised Intellitix’s RFID technology, and building on last year it has integrated seamlessly and given us a better customer experience. As well as bringing the convenience of cashless payments and faster transactions, with the festival taking place across a busy working town, RFID enabled us to secure our event venues and outdoor parties, ensuring only ticketholders could enter. The Intellitix team were great to work with and I had absolute faith and trust in their ability to deliver.”

Across Mayrhofen, other locations outside of the Snowbombing venues also adopted Intellitix’s RFID technology, including The Arena and the Sport & Spa Hotel Strass.

Erich Roscher from the Sport & Spa Hotel Strass commented: “We used the Intellitix system in our hotel throughout the Snowbombing Festival. It worked really well and helped us to improve our sales as well as making things a lot easier because there was no cash involved. It was really easy to install and the team was great to work with, I can only recommend this system for any other events!”

This year’s festival witnessed performances from a unique line-up of original and ground-breaking artistes including The Prodigy, Jungle, Bastille and Fatboy Slim.