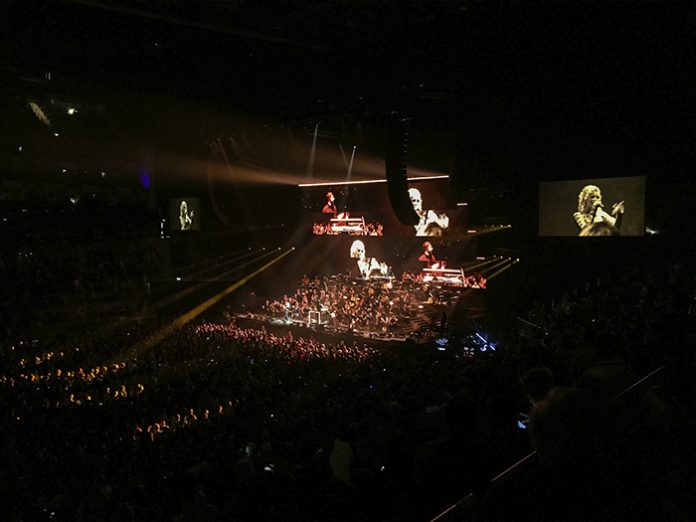 Veteran Concert Director Mark Davies shot the show with all video equipment and camera system provided by Video Design. “Because of the orchestra on stage this was no ordinary arena show,” Davies commented. “In simple terms, there was no room for a camera track in the pit as the Subs needed to be placed in advance of the downstage edge to help isolate the musicians from low frequency energy. Yet, a track based system in that position was essential if I was to be able to convey all the visual dynamics of this high energy show. Fortunately, Video Design has been working closely with Bradley, using their excellent robo-cams to produce just the solution I needed. The new Bradley tracking camera proved a great alternative. In fact, the experience was so good that if this situation occurs again I would use even more of them.”

A 48mm diameter scaffolding pipe rigged to the front stage edge was all the camera system needed. “It’s that easy to rig,” Davies continued. “And that makes it really useful – it takes up almost no room. Keely Myers who ran the production was very happy. Luke Collins from Video Design operated the cameras remotely for me and he was excellent. That took care of the pit shots, but the other big difficulty with shooting an orchestra is there are music stands everywhere which blocks angles. To get clean shots you need to be up high, but a tower camera or a jib of some size on stage was just not a practical consideration. Again, tracking robo-cams rigged high up the sides of stage were a perfect alternative. Unobtrusive, they were barely visible on stage by comparison with the conventional alternative. You can also control the cameras using DMX so it’s a simple thing to hook them into a Black Trax system for sophisticated programming of motion and focus if you need to.”

Cutting for such a wide screen format also provided its own conundrums for Davies, who concluded: “The screen surfaces were essentially in 2 parts; IMAG to either side of stage which I fed 100% of the show; on stage a set of tracking landscape LED screens which moved under Kinesis control. There were 4 songs where IMAG was used on the stage screens so in effect I needed to think about 2 distinct cuts simultaneously. That took a while to get my head around. Otherwise the rear LED ran content which I have to say was beautiful. Programmed by Jack Banks and Nathan under the direction of Dan Hill and Chris Swain from Cassius Creative who made the content, the result was really slick. Luckily for me between the 2 different cuts the framing stayed the same which made things easier, but a lot of what was used on the back screens needed to be more mid-shot to work, so it was not straight forward. Considering we had just one day of rehearsal it all went very smoothly. Straight into 6 flawless shows in 5 venues back to back – that’s measure of how good the delivery is from Video Design and the great crews they put together.”

Tong and the orchestra have announced further dates in 2018.