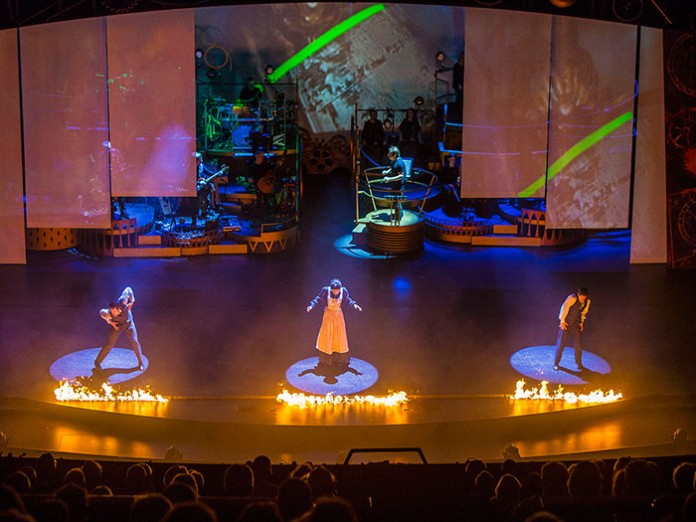 Blackburn, UK based lighting and visuals specialist HSL is supplying lighting and production rigging for the recently opened and much talked about theatrical staging of Jeff Wayne’s 1978 cult album “War of the Worlds” at the Dominion Theatre, Tottenham Court Road, London, produced by Bill Kenwright. The work is based on HG Wells’ 1879 novel about a Martian invasion and has the additional resonance of being played completely with a mix of orchestral and electronic musicians conducted by Wayne himself. Directed by Bob Tomson, it’s the first such presentation of the work, which is well known as an arena touring show, with a star studded cast onstage, narrated by Liam Neeson – who appears via video – and an equally talented technical and creative team includes lighting designed by Tim Oliver and set by Ric Lipson for Stufish.

Oliver’s experience of lighting music tours and concerts as well as theatrical shows made him an ideal choice for the lighting design role, in which he has seamlessly combined techniques and visual trickery from both disciplines to create the rich and varied lighting which is such an essential part of the atmosphere building. HSL’s John Slevin, project managing the account said: “We’re extremely proud to be supporting this production for the first time in the West End. The design is vibrant and fast paced helping to bring a new visual atmosphere to the piece. As always it’s a great experience working with Tim through the process from initial design to opening night.”

Slevin worked closely on WoTW with Emma Nolan, HSL’s account handler for all the Kenwright productions for which they are a technical supplier. His actual starting point for the creative treatment was seeing the last arena tour in 2014. He also likes the music which was a big bonus, and his brief included to make it as ‘immersive’ an experience as possible for the audiences. He also had to physically work around a substantial amount of projection which is a key to the narrative, in terms of equipment placement. They used a mix of the Dominion’s house lighting bars and installed pre-rigged trusses to provide additional lighting positions exactly where needed.

LX Bar 1 is split into three sections all independently hung on two Kinesys motors each to maximise flexibility. LX 2 and 3 are the house bars and LX 4 and 5 are pre-rigged trusses sub-hung from house bars which also move, but manually. LX 6 is just downstage of the cyc. To avoid interfering with the projection and also because it worked perfectly for the staging of the piece, Slevin has made the most of side lighting positions, the stage right and left Boom 1s are also vertical sections of pre-rigged truss, and lighting fixtures on the other side booms are either secured to ladders, bars or other house positions.

Two advanced trusses have been flown for the show and the circle and balcony fronts are utilised for additional lighting positions. Around the audience, 12 x Mac Aura LED washes are installed on custom brackets to assist with special effects and immersive moments as the audience are further swept up in the action by this ‘surround’ lighting. Slevin chose both Martin and Robe moving lights for a number of different reasons primarily to provide “the most flexible solution to light a complex and dramatic performance that needed a lot of detail picking out.”

Martin MAC Viper Performances are the main profiles – chosen for their shuttering system, brightness, versatility and good range of gobos, with 21 dotted all over the side booms and LX bars, The ones on LX 1 and 3 in particular are hugely effective in creating the sticky, red Martian weed effect all across the stage and props with a bespoke gobo. 13 MAC 3 Performances on the two advance trusses are used for most of the specials on individual performers, with another four on the circle front to texture the pros arch with gobo looks.

Eight Robe MMX Spots on LX 2 provide backlight specials and treatment. These were also chosen for their multi-functionality, as were 20 x MMX WashBeams, with 12 located above the band risers on LX 4 and 5 and the balance (of WashBeams) on LX 1 for general stage washes and cross lighting.Three Robe Pointes on drop bars do the heat Ray’s emanating from the Martian Fighting Machines (MFMs – also called Tripods in the original HG Wells story).

24 GLP Impression X4s are ensconced on the side ladders and used to shoot across the stage, with another five X4S’s running around the stage lip in the footlights position. Their small and compact dimensions make them ideal for this application. HSL purchased 50 new ProLights Eclipse FC LED profiles for the project which have an RGBL (lime) colour mixing system and are extremely bright. They are on the side ladders as principal side lighting units at shin, mid and high positions, all with a frost filter for additional diffusion. They have been so impressed with the performance of these fixtures that HSL is purchasing more.

The band are back-lit with 15 x Robe CycFX 8s on LX 6 with another 9 CycFX 8s rigged on LX 2 to backlight the whole downstage area.Twenty-two Philips Nitro strobes get a good battering as you can imagine, especially in the battle scenes, with 12 around the pros arch firing into the audience and the rest scattered around the rig. Dispersed around the band risers are ProLights COB LED PARs. The reflector in these helps emulate a tungsten source very authentically, so they are scattered around the band risers and up-light all the set portal legs.

A splattering of 24 x PixelPAR LED PARs provide accents and eye candy around the band risers and on LX 4 and 5 directly above the band. The scenic MFM prop is also raised and lowered via HSL’s Kinesys system which sidles across the stage several times during the show and was fabricated by Production Park, co-ordinated by Ben Brookes. Squeezed craftily into this are two Robe LEDWash 600s for the eyes, two Prolights Cobs on the wings and a Clay Paky Sharpy and ZR44 smoke machine which combine to do the heat ray effect. 12 MR16 ‘Birdies’ are built in to the two main stage trucks that are rolled on and off during the performance, controlled via wireless DMX, and Jeff Wayne’s special is a MAC Viper. The production is utilising the Dominion’s house follow spots.

The challenges and intricacies of the build schedule meant Oliver and his programmer Chris Hirst had to commit to a lot before seeing the complete run through in the venue. Oliver completed two weeks of programming in his home studio with WYSIWYG. With over 4,000 lighting cues in the two and a half hour show, most of it is timecode triggered. HSL supplied production rigger Callum Willoughby for the rehearsal period, Darran Curtis is the production LX and Ross Bristol is operating both lighting and the Kinesys system for the run. Ashley Simper is LX 2 who also runs the video content via a d3 media server, and LX 3 Phil Lewis also takes care of the pyro.