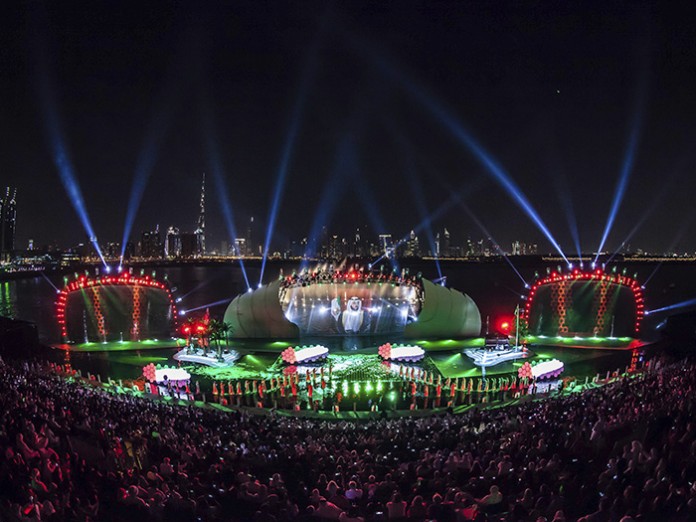 With just eight weeks lead-time, HQ delivered a show staged entirely upon the water with Dubai’s dramatic skyline as the backdrop. The event was held at Dubai Design District on a body of water that will soon be connected to the Dubai Canal system, providing HQ Creative with a rare opportunity to use a unique location.

Holding the event on water presented challenges for the team. Technical Director, Andrew Stevens, commented: “When trying to build a stage to sit just millimetres below the water’s surface, and facing close to a 15mm drop in water level each week due to evaporation, we encountered a constant battle to keep the stage submerged beneath the water’s surface.

“The water was tested as containing an equivalent level of salt to the Dead Sea and this had a detrimental effect on both the crew and the equipment being installed.

“After each night of testing the water curtains, we used 7,500 gallons of fresh water (and many hours) to clean the hardware to enable further content testing the following night.”

Despite these challenges and with just five weeks build time, HQ delivered a grand and elegant open-air show of light, music, movement and theatrics.

A cast of over 400 local and international artists (including school children, dance students and police cadets) performed on the submerged stages, supported by water screens, dancing fountains and pyrotechnics.

Traditional Emirati cultural performances were at the heart of show, creatively staged against mass ‘living scenery’ and injected with contemporary performance pieces.