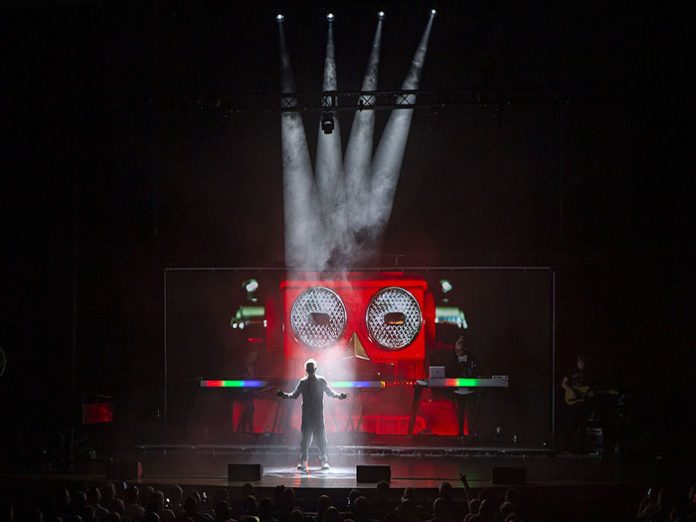 The moving lights include 12 Robe MegaPointes and 26 LEDBeam 150s which were supplied in the UK and Europe by rental company Siyan.

Jones is considered one of the defining figures of the mid-1980s UK synth-pop genre and he has generations of loyal and new fans who enjoy seeing him live.

Nyholm collaborated with Jones and his producer Stephen Tayler on the production design and look of the show, and the brief was to create something off-beat and interesting.

The artist also wanted it to look and feel contemporary in an electronic/robotic way. He wanted an aspect of video in the production but stipulated that this should be part of the band rather than overpowering or a distraction to the music.

Nyholm and Tayler created a stage set with an 8 by 3 metre transparent screen, which shows a variety of content throughout the performance. On message with the futuristic vibe, the idea was to keep the stage clean and streamlined, so most of the lights are concealed behind the screen, and the rig is always trimmed as high as possible.

One rear truss has the screen hung below it, and there is a black silk backdrop upstage of this.

Eight of the MegaPointes are rigged on this back truss, with the other four hidden behind the screen on the floor just in front of the backdrop.

The top ones are used for backlighting, gobo looks and animations onto the back as well as for some aerial interaction into the crowd. The deck-based fixtures behind the screen create powerful moody beams and silhouettes throughout the show.

Upstage of the screens are four ‘robot towers’ which are fully loaded with strobes and Moles.

The LEDBeam 150s are on the back truss – used for colour washes – and side-stage on the floor for cross washes and low-level key lighting.

It is the first time that Nyholm had used MegaPointes, a decision energised by “other people raving about them.”

“The lightweight and flexibility are fantastic,” he commented, together with the fact that they can go from a narrow pin-point to a super-wide wash. However, it’s the clarity of the gobos that has probably impressed him the most so far, enabling his backdrop looks to really stand out.

He has used LEDBeam 150s on all his designs since discovering them in a Howard Jones tour three years ago.

He added: “They are light and perfect for smaller venues and designs, and while they look amazing in a club, they are also not lost in arenas. They just always do their job.”

He also thinks both types of fixtures are aesthetically pleasing in appearance, something that’s important when the desire is for the lighting to be unobtrusive.

The overall concept of the show was ‘versatile’ – they wanted to go from looks resembling the early days when Howard was playing atmospheric clubs to those modern electronic and digital looks that are common today. Also, they needed to be able to strip right back to just piano sometimes and the set starts with Howard on the piano for the first two numbers; a cool, slightly retro look achieved with the help of two well-positioned Robe PATT2017s.

The biggest challenges – as is often the case – were weight, time and fitting into the budget. The goal was to utilise plenty of lights and be as creative as possible with limited time and crew – it was a one-bus tour – so imagination and thought were needed.

“That’s why we chose MegaPointes and LEDBeam 150s,” explained Nyholm, who has been working with Howard Jones since 2009. Initially, that was as a moving light operator for his original LD Nick Valdez, the MD and owner of UK rental company Siyan.

When the 25 the anniversary gig was staged at Indigo in the London O2 Arena, Howard wanted to reassemble the original team from his very first shows, and Nyholm came in to program for Nick. He took over the lighting design for Howard in 2014.

Jones started the show alone on the piano with the band hidden behind the gauze, and they started to appear as the set unfolded. Nyholm and Tayler developed the look and feel of the different songs for the rest of the set from there. Once they had realised the scope and potential of the screen, they created many 3D scenes involving video content and lighting, like in “Speed of Love” where a moon onscreen is complimented by one of the upstage MegaPointes beaming through and into the audience.