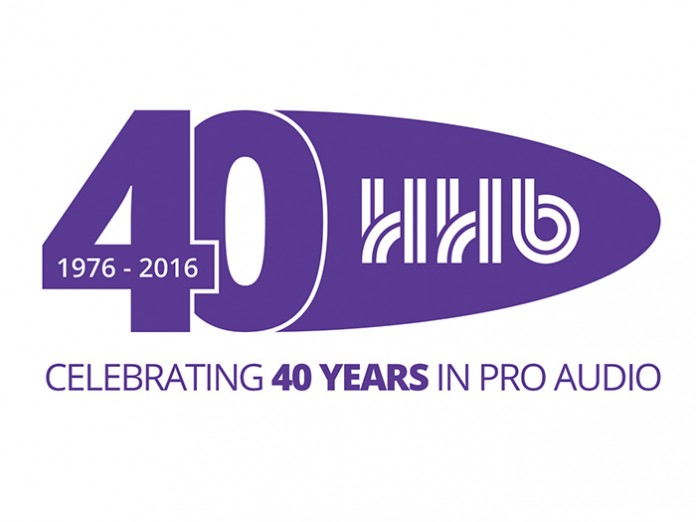 2016 marks the 40th anniversary of the establishment of HHB Communications, which was founded on 1 February 1976 starting as a local live sound company.

For 40 years, HHB has occupied a unique position in the professional audio industry. Much more than simply a reseller, HHB offers customers the highest levels of specialist advice and technical support, counting the world’s leading broadcasters, recording studios, post-production facilities and educational establishments as customers, while major manufacturers have appointed HHB in various capacities as an exclusive distributor.

HHB’s HQ in north-west London houses technical facilities, a service department, warehousing, demo suites and accounts offices, and is also home to the sales team. Located directly opposite is Source Distribution, a division of HHB responsible for the UK distribution of leading pro audio brands.

Scrub is the specialist outpost of HHB located in the heart of Soho, established to serve the needs of the independent post-production community. And further afield, Canadian audio professionals enjoy similar levels of support from Toronto-based HHB Canada.

HHB was started when Managing Director Ian Jones, then Manager of Half Human Band, developed the band’s initials, HHB, as his business moniker. In the 1980s, HHB brokered the introduction of digital multitrack recording in the UK, providing the interface between pioneering manufacturers and an understandably cautious studio industry. It was also HHB that recognised the potential in emerging two-track digital audio formats, developing and refining them for professional use.

In 1993, HHB responded to the European Broadcast Union’s advice to its members that “DAT tape should be chosen with care” by developing the world’s highest performing DAT tape. HHB manufactured and supplied millions of DAT tapes worldwide.

Indeed, HHB manufactured a string of innovations in digital audio technology, including the PORTADAT range of professional portable DAT recorders, the CDR range of CD recorders and the groundbreaking HHB FlashMic – the world’s first digital recording microphone and the recorder of choice for major broadcasters and news organisations the world over.

HHB is justifiably proud of an illustrious past, but always focused on the future. Jones said, “As we enter our 40th year in business, the group has completed another successful year with record turnover. To achieve this has required a huge effort by the team, who are widely respected for their expertise, and for their ready willingness to help with any matter related to audio production.”