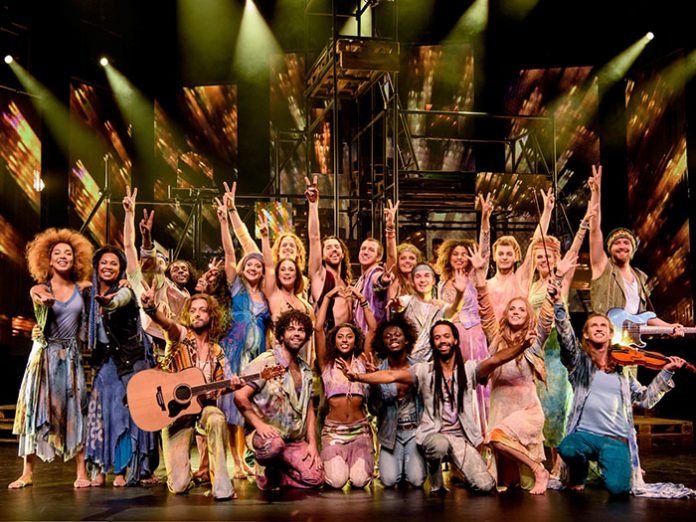 Audio technology from HARMAN Professional Solutions is playing a starring role in the six month Dutch touring production of the hit musical Hair, inside a JBL rig supplied by Story Sound.
According to Story Sound Managing Director, Michael Story, getting the balance of dialogue intelligibility and full-on concert sound was imperative. Working for major international company Stage Entertainment, Story was offered this sound design challenge by technical producer, Ed Wielstra, based on his success in the past. “I said I was happy to do it, but wanted to provide my own sound – to prove that JBL would be outstanding for this kind of production,” he said, specifying the VT4886.
A long time advocate of JBL’s premier line arrays, Story has given the JBL / Crown VRack combination a unique opportunity to flex its muscles in the theatre world. The design for Hair is based on a conventional L/R proscenium hang of 12 VT4886 elements per side, with four VT4883 dual 12in Subcompact – also flown. This has been supplemented by five VT4886, stacked a side to bring the image down to the first few rows, and a pair of ground-stacked VT4880A to reinforce the four-piece band in the low frequencies.
With 22 in the cast of this energetic action packed production, the challenges are many. “There is a lot going on but if the sound isn’t handled properly people get fatigued. A big challenge is the intelligibility, but that is never a problem with JBL,” stated Story.
“We have created so much space in the sound, that we have been able to maintain a good band level — getting sufficient vocal volume from the headset mics, which isn’t always the case. At the same time audiences have been able to experience the dialogue. With so much dynamic room and projection from the JBL system, you can play it loud and still hear the intelligibility of every lyric and spoken word.”
“The FOH Engineer was in heaven, with the audience telling him they could hear every word for the first time. And with the projection this good you can put a band in the mix and no-one is blown away with excessive volume.”
Most importantly, he said, “when you optimise the sound you can see the whole frequency range, with no loss of midrange. The Tools provided in Performance Manager make it possible to shape the beam over the width of this range.”
Michael Story adds that the power and DSP capacity of their VRacks will make it possible to implement further improvements to the Performance Manager software going forward. “This will ensure a great return on investment for us,” he concluded.
pro.harman.com