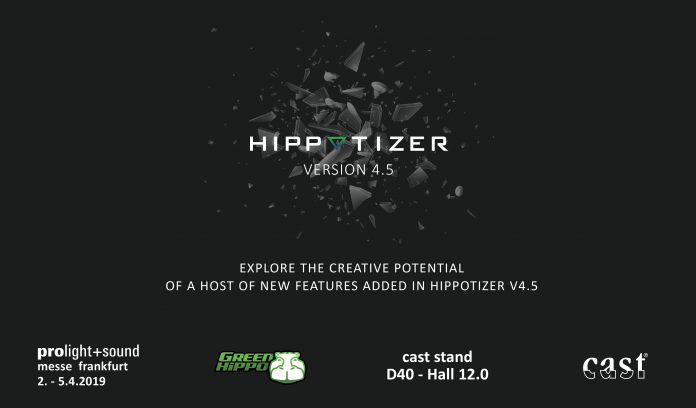 Green Hippo is constantly improving the Hippotizer software, the latest version on display at Prolight+Sound adds two widely requested features: Object to Output and BeatBridge as well as a host of smaller fixes and improvements.

In addition, V4.5 introduces BeatBridge, a new component that simplifies programming by allowing Hippotizer parameters to react to audio input. It’s a fast and easy way to create, in real-time, sound reactive effects. BeatBridge operates as part of the preset system, ensuring compatibility with external controllers such as Midi and DMX.

Axis is a new fibre-optic based automatic alignment system designed by Green Hippo offering an alternative to existing camera-based alignment systems. Axis offers key advantages compared to a camera-based system including the ability to handle complex 3D models, faster line-up, high tolerance of ambient light levels and no need to maintain cameras. Axis is ideal for automatically aligning projection onto complex set pieces and models such as those found in theatre, museums and theme parks. Seamlessly integrated with Hippotizer 3D toolset SHAPE, Axis can be quickly added to existing Hippotizer projects to automate the projector alignment process.