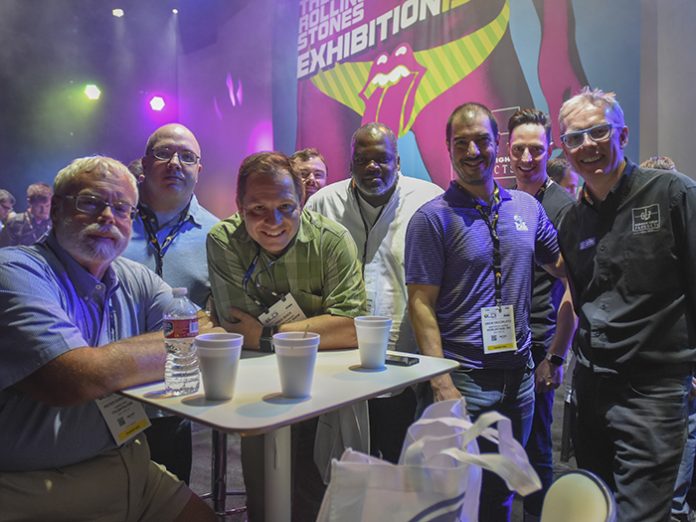 GLP reaped the rewards for investing in what was their largest ever stand at this year’s LDI Show in Las Vegas.

Thie 2,500 sqft space had an open area at the front, adorned with demo tables bearing the new fixtures, enabled lighting professionals to get up close and personal with the products before joining GLP staff in the meeting and hospitality area. The massive backdrop to the stand emphasised the company’s status as the Official Lighting Supplier for Exhibitionism, the curation of Rolling Stones’ artefacts, successfully transferred from London, and shortly to open in New York.

Time coded light-shows took place on the hour as the sides of the booth dropped to provide an immersive experience. The presentation began with an overview of the new products being displayed for the first time at LDI – namely the X4 atom 30W and the GT-1.

With the presentation complete, the curtains were raised to reveal an expansive display featuring those same new fixtures along with X4 L, X4 Bar 10, and X1 fixtures (interspersed with X4 XL). Covering a variety of musical genres the fixtures really highlighted the flexibility of the GLP range. At the end of the presentation, the booth was opened up and the rig left revealed to enable visitors to get a closer look, before the stand reverted to its original pre-show state.

GLP President, Mark Ravenhill was in no doubt of its success. “We were packed every time the show ran, often having to turn people away as word spread around the show floor,” he enthused. Also impressed were the LDI awards judges who presented GLP with the gong for ‘Most Creative Use of Light’ based on the presentation. Lighting design and programming of the show was by Matt Shimamoto of Volt Lites, whilst Matt and Mark shared overall booth design duties.

Summing up, Mark Ravenhill said: “It was a great show all round, where we met a large number of designers, customers and both current and future users. The attendance at the show was fantastic and we have confirmed sales and specifications directly from the show.”