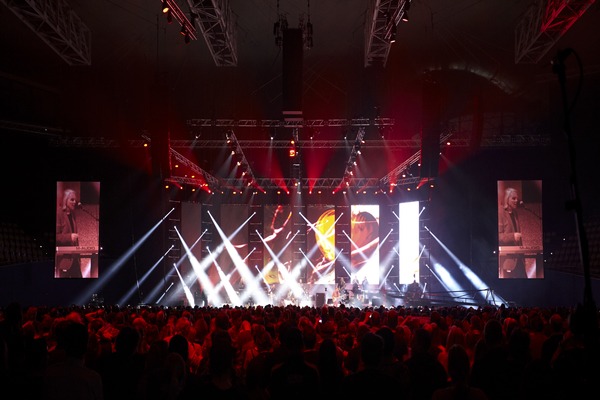 Barny Murphy, Günther Sigl and the Spider Murphy Gang’s recent concert celebrated 40 years since their inception, and was supported by Marc Lorenz from CUE Design, who provided the perfect light show at the Olympiahalle Arena in Munich, Germany.

The band and LD are long-time companions. “In the mid-’90s, when I was still at the beginning of my career, I worked in Munich for the first time,” Lorenz recalled. “Later, at the band’s 20th anniversary, I had my second engagement as moving light operator, and at the planning stage for the 40th Anniversary came the request for me to take over the lighting design for the Olympiahalle.”

“The band is rock ‘n’ roll — and should always remain so. But of course, there must also be a modern look,” says Marc Lorenz, describing his design. In the final analysis, the mixture of lighting covered everything: “Sloping truss fingers above the stage, just as it was in the 80s plus the more modern large LED surfaces, moving lights and strobes in the stage background — as you would see it today.”

The show was equipped by Gahrens & Battermann’s Munich branch, with a total of 42 German Light Products impression X4 on stage and 46 GLP impression X4L above the audience. In addition, the lighting crew installed 14 of the new JDC1 hybrid strobes. “The impressions are the perfect workhorses and are already in stock at Gahrens & Battermann,” added Lorenz. “I recently used the JDC1 at a show in Hamburg, and I spontaneously came up with the idea of ​​using these strobes as a gimmick. Strobes are typically rock ‘n’ roll, but the LED surfaces are currently hip and modern — so the JDC1 fit perfectly into the design. Classic strobes for the 80s, flat LED tiles for the modern age.”

The LD was particularly impressed with the JDC1. “The capabilities of the impression X4 are already well-known. But the fact that I could create so many surprises with just 14 hybrid strobes in the background of such a large stage was really impressive. The JDC1 easily prevailed against an overall inventory of 130 moving lights — and yet I have still to exploit the full potential.”

Lorenz concluded: “At the system check on the morning before the second show, I experimented a bit with the tilt. The JDC1 hung on ladders about 1.5-meters in front of the backdrop and could still illuminate the entire background. That would have given the set added depth. Unfortunately, I already had all the cues stacked and so this effect no longer made it to the show,” he says regretfully. “But at the next opportunity, I will certainly create this effect.”