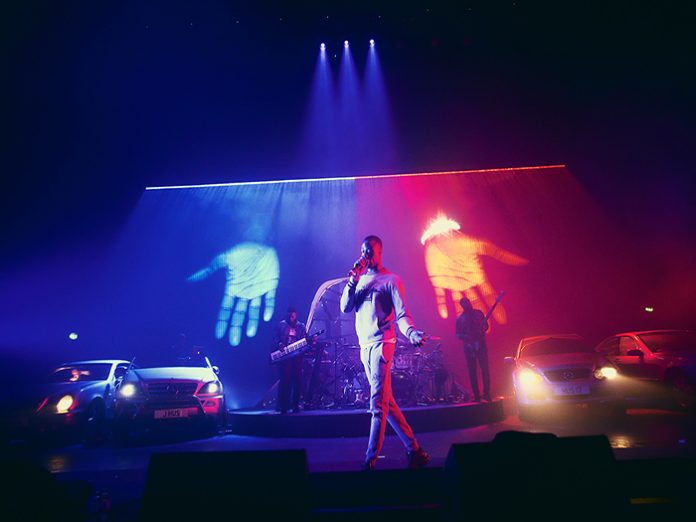 When Lighting Designer Sam Tozer provided his lightshow for the BBK Festival at the O2 Arena in London over the August Bank Holiday 2017, he called on German Light Product’s X4 Bar 20 battens for the marathon event.

As a result, LRI Production Manager David Davies and the Vision Factory LD were invited onto the latest J Hus Common Sense tour, and this time the latter added GLP’s ground-breaking GT-1 hybrid Spot/Wash lights to the mix. The afrobeat/grime artist had supported BBK, and the tour would took them to various theatres, universities and academies, ending with a massive show at Brixton Academy. “In addition to using my favourite fixtures, including the X4 Bars, I knew this time around we needed something a bit different,” he stated. “I spotted the GT-1 for the first time when I visited the GLP factory, having previously seen them at PLASA.”

During most of the tour they carried a small floor lighting package consisting of 22 GLP X4 Bar 20’s and 8 GLP GT-1s, to interface with the house systems — as well as 2 Mercedes cars, cut in half, and a letterbox video screen. Sticking to the successful formula, VER again supplied the equipment and Kris Goodman was the Lighting Programmer. “He also operated the show for me,” Tozer confirmed. “I was seeking some specific looks that only the X4 Bars and GT1 could produce. I saw a demo of them with some students down in Plymouth and with the help of Dave Stewart [at GLP UK] I managed to get my hands on them.

“They fitted perfectly for what I was looking for,” he continued. “I wanted a lightweight, small and easily tourable fixture that could give the brightness and beam size of a Sharpy but could then could go super wide and carry the right optics to keep the more textured gobo looks clean and sharp all way down the room.”

The design itself consisted of 2 key pieces of set, one of which was only revealed at the London show. The Mercedes cars provided the main look; the second was a giant revealing hat. “Both items were requested by the artist,” confirmed the LD. “The challenge behind this was to try and create a visual medium between a cartoon-looking hat and very bold, very real set of cars.” For the London show he increased the number of X4 Bars to 33, while the 8 GT-1s were distributed along the floor. “These helped me create a textured back light that pierced through the cars, while the Bars created two clean lines and walls of light across the back of the stage.”

Summing up, he said he chose the GT-1s for their versatility in being able to go from the tight beam look to the super wide wash, and the GLP X4 Bars also for their versatility. “Once Kris got the hang of controlling the optics he couldn’t stop going on about how good they were, while the wall of light look created by the X4 Bars was massively loved by the whole production team.”

Tozer was supported by Paul Gilzene at VER and Dave Stewart at GLP. The designer has subsequently continued to use GLP fixtures, with units out on the latest Thundercat tour and the Fickle Friends headline show at Kentish Town Forum.