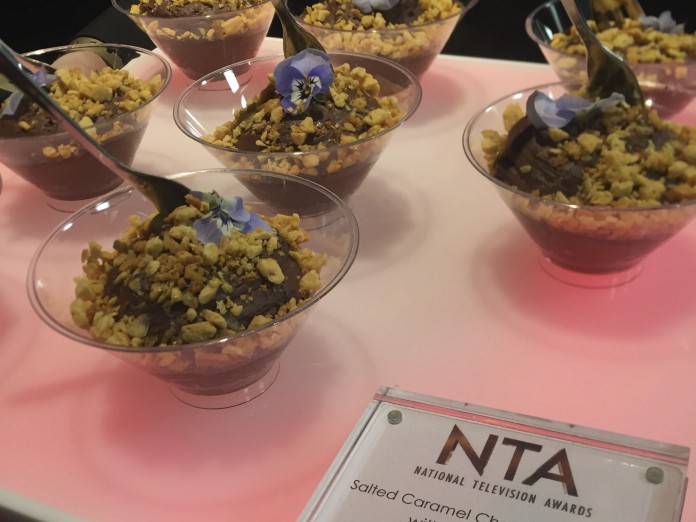 As the stars celebrated their National Television Awards on stage, behind the scenes GIG…fyi had the enviable job of providing enticing food and drinks to the hundreds of celebrities attending the biggest night in British TV.

GIG…fyi (feeding your imagination) also kept the hundreds of backstage crew fuelled with round-the-clock food and refreshments during the build and break of the 21st anniversary show, which was hosted by Dermot O’Leary and broadcast live on ITV on 20 January from London’s O2 Arena.

Afterwards they were treated to a champagne reception with bowl food comprising of braised beef cheek, miso sesame salmon and tomato and saffron risotto as well as salt and pepper prawn and smoked chicken canapés. Desserts included lemon posset with shortbread and salted caramel chocolate mousse with honeycomb.

Refreshments were also provided for the press and green rooms as well as the Star Treatment area where 550 guests with upgraded tickets could take advantage of full hair, make up, nails and massage facilities.

Katy Turner, Operations Manager for GIG…fyi, said: “It’s always a pleasure and an honour to work at the National Television Awards feeding some of the biggest names in the TV and entertainment world. Operationally it is a challenge with so many areas running at once that sees 70 staff on site at the ceremony serving over 2,000 canapes and 2,400 bowls of food”

She concluded: “Preparations start before Christmas when we agree the options from a bespoke sample menu that we specifically develop for the awards. This year the menu combines contemporary items with popular favourites that have been given a unique new twist in their presentation.”

Originally launched in 1984 as Eat to the Beat – an artist, production and crew catering business specialising in backstage catering services for music, entertainment, film and TV industries – the company has catered many of the biggest names in the entertainment world. Eat to the Beat provides backstage catering support for international tours, major festivals such as Glastonbury and Reading, concert venues and TV and film locations.