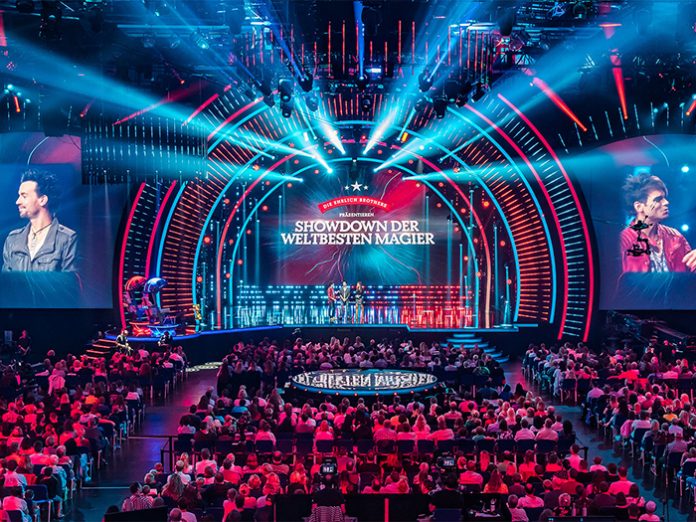 The Ehrlich Brothers brought their illusionist tour to Stuttgart, supported by a range of German Light Products fixtures.

Working alongside Ehrlich Entertainment GmbH, were the Production Resource Group, who provided rigging, lighting, video and media technology, Schiffer & Faber for decoration construction, TopVision for image technology, PMT for camera systems and mo2 design were also on board.

Their team, led by Lighting Designer Manfred ‘Ollie’ Olma and Project Manager Matthias Allhoff, took care of the adaptation of the tour production for television; taking over all tenders and planning, as well as the creation of media content and media and lighting design.

The Ehrlich Brothers’ already gigantic tour set-up was increased again in Stuttgart. “In terms of tour production, nothing comparable is currently on the road in Germany,” stated Olma. “Even the stage is unique, as well as the often complex networked light and media technology that is required for the illusions of the two brothers.

“Virtually every detail of this is top secret — which of course does not necessarily make it easier for our lighting and media technicians! But we work very closely together with our production colleagues,” continued the founder and CEO of mo2.

“Many of these pieces of equipment were used to transfer the otherwise on-stage show to a separate centre stage, set in the middle of the audience,” reported Ollie Olma, outlining the challenge faced by mo2.

He made special mention of the GLP impression X4 Bars. “All 826 Bars were controlled in single-pixel mode and pixel-mapped, resulting in a huge number of over 110,000 control parameters. Together with the necessary control channels for the other lighting equipment, it was too much for the MA2 control desk to handle. But as we wanted to use the Bars both as a light source — in addition to the main stage — as well as a complex video space, we had no other choice than to allocate the Bars to the video element.

“In addition to the two grandMA2 full-size desks, additional six VPUs and 20 NPUs provided the necessary number of channels for this application. The VPUs were then controlled via the network from the light panels,” Olma explained.

A highlight of the show was the presentation of the GLP KNV fixtures that were used for the TV recording of Magical Worlds. These were on a side stage and used for backlighting the show band, as well as the form of the letters “E” and “B”.

Previously, 2 KNV full circles were seen in the Showdown of the Magician, as part of a special illusion. The use of KNV came about at the request of the artists themselves: “When we were first shown a single KNV module by Ollie during the preparation for the show, it immediately gave us an idea,” said Christian Ehrlich. “The effect worked brilliantly!”