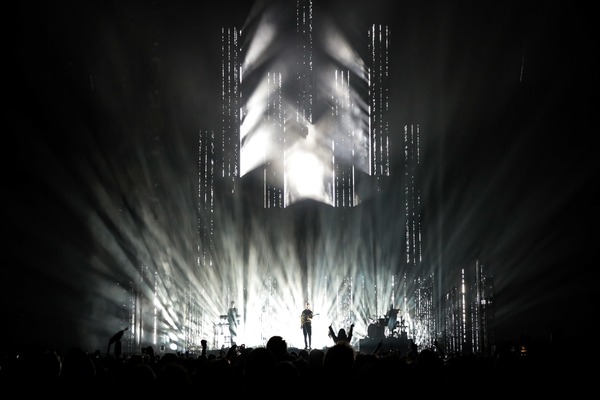 Mercury award-winning band alt-J released their 3rd album RELAXER in 2017, complete with a global tour and FragmentNine tasked with designing the live production.

Having worked with the indie band on previous tours, the Creative Direction and Production Designers decided to bring the real-time power of Notch into the mix, on d3 media servers. It was the company’s first foray into a show with songs relying exclusively on Notch. The team worked with digital content designers All of it Now to build notch blocks and exposed parameters for d3 which was controlled by sockpuppet.

Principal Designer at FragmentNine, Jackson Gallagher, said: “The coolest part of all of this is that we have all the musical elements of all the songs already extracted into cue stacks so we can dump lighting or video hits onto say, that snare after the chorus and it is already time coded and ready to go. Being able to exact such fine control over the video with this workflow was incredible.

“We are able to do things in 5 seconds which would take a normal content team hours. While the entire IMAG for the show was always treated in Notch, we took baby steps with Notch content but it went very smoothly that will definitely use it more heavily in the future. Already rebuilding some of the songs for this show in Notch,” Gallagher explained.

Luke Malcolm, Commercial Director at Notch concluded: “We created Notch to harness the power of real-time to give creative a deeper connection to their work, more powerful tools to create with and, ultimately, a stronger output. Everyday we’re blown away by how creators use Notch is such exceptional ways.”

FragmentNine worked with Notch experts All of it Now, with additional content from Bryte Design, ECM. The equipment vendor was Liteup Events. The show was run on d3 2x4pro media servers.