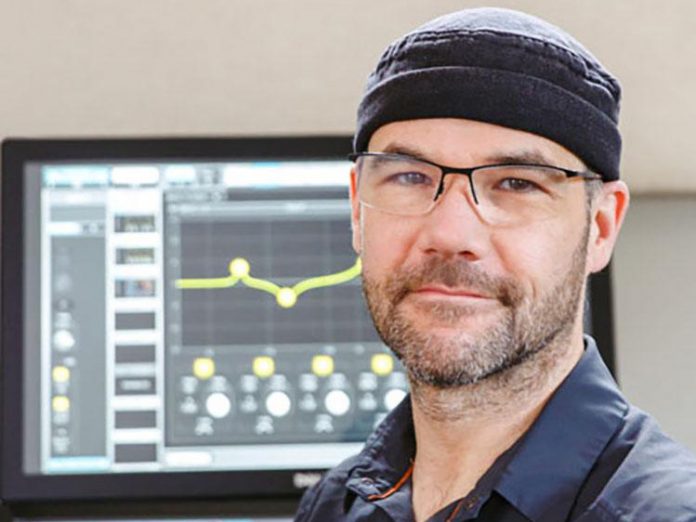 Galloway commented, “My current setup includes a very compact system consisting of a Waves SoundGrid server and a 2014 Mac Mini running Windows 10 with two 20” Dell 10-point touch screens. All of that fits in one Pelican case, which is less than 50 pounds and meets standard airline luggage size requirements. Along with that, I carry a single rolling rack that contains two DiGiGrid IOX audio interfaces, which act as my stage box (24 input, 12 output). Additionally, at FOH, I use a DiGiGrid D interface, which serves as a talkback mic input, headphone out and a stereo out for FOH. I’m really, really pleased with what I can get done with such a compact rig.”

Galloway added: “I chose the eMotion LV1 mixer for the Nicolas Jaar tour for several reasons. One was the size of the system itself. This tour cycle lasts over a year, and in that time we will be traveling by tour bus, as well as doing a lot of fly gigs. The LV1 is absolutely the best choice I could find in a system that could fly with me easily. We are also playing a wide variety of venues, from large outdoor festivals to theatre’s and clubs. I need a system that gives me the tools to deal with whatever comes my way, and having the full suite of Waves plugins allows me to compensate for PA or room issues, while the I/O flexibility that the LV1 offers enables me to deal with different front fill, delay and recording feeds every night. A really unique feature of the LV1 is how easily I can integrate audio coming from computers into the system; instead of taking analog audio from an audio interface attached to the artist’s computer, I can simply connect that machine to the Waves SoundGridnetwork and have 32 channels or more of pristine digital audio, using less hardware and achieving better sound quality than I’ve ever been able to get before with other setups.”

He continued, “The primary benefit that LV1 offers me is the integrated, easy access to Waves plugins. It’s great to be able to use Waves plugins on other consoles, but I really need to be able to interact with the UI in real-time. Often when I’m working with Nicolas Jaar, I end up practically ‘playing’ plugins, manipulating their settings constantly to keep up with the music. This is something that just isn’t possible on most other digital mixing environments, and being able to integrate laptops both as inputs from stage and for recording and virtual soundcheck has been fantastic. Most of all, though, it’s the sound quality: The LV1 sounds absolutely fantastic. Nico and I work very closely to ensure that we put on a show that exceeds the audience’s expectations, and the LV1 has totally come through for me in terms of sound quality.”

On using Waves plugins, Galloway commented: “My favorite Waves plugins are the C6, the C6 and also the C6! Seriously, the Waves C6 Multiband Compressor is my primary tone-shaping tool, and I insert it on almost every channel. I use it for everything from EQ on input channels to compression of the main stereo bus. When I work with electronic artists, I often have to mix multiple sources that each contain a complete stereo mix. This can be challenging when elements from one mix get in the way of another mix. I find the C6 to be the best tool for pulling individual elements like a snare, guitar riff, or vocal line out of a full mix, allowing me to effectively combine multiple existing mixes together without creating a sonic mess. I also use the C6 extensively to create kick and snare sounds: I’ll often isolate a very narrow frequency band and then use aggressive upward expansion (positive Range settings) to enhance the attack. Manually adjusting the attack and release time of that band allows me to control the entire envelope of that particular portion of the sound. It’s like a more manual version of Waves Trans-X. On the main stereo mix, I use the C6’s two floating bands to help me get rid of unwanted resonance in a room. If there is a problem frequency, I’ll isolate it, pull it down -6 dB, but then set my Range on that band to 6 dB and carefully set my Threshold setting so that that frequency does come through when needed, but is suppressed most of the time. Waves MaxxBass has also recently come back into my list of favourites. I had been using it a lot in the studio but now I’m finding that it really helps me get the kick and synth bass to jump out and ‘speak’ in a live environment.”

On the tour’s unique audio needs, Galloway added, “Nicolas sends me an enormous variety of sounds. Everything from intense bass clarinet, to classic drum machines, modular synths, organ, samples from vinyl, field recordings, orchestral recordings, and an infinite variety of effects. His approach includes a lot of improvisation and instantaneous changes. Waves plugins simply allow me to deal with this astounding range of sounds and the twists and turns of Nico’s playing style. This is most definitely NOT your standard electronic music mix. Using the LV1 helps me make the very most out of every sound and enables me to work closely with the artist to generate the exact feeling we want to convey to the audience.”