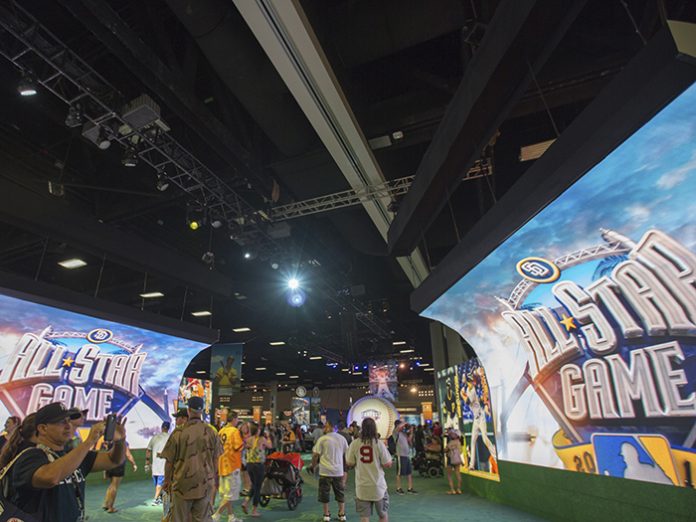 BaAM Productions were tasked with revamping the fan experience inside the San Diego Convention Centre, with MSI Productions Tech Director Tom Bollard opting to use the FLEXLite technology.

“We have been involved with the MLB All-Star FanFest since the event first took place in San Diego back in 1992,” said Bollard. “This year the new MLB Commissioner wanted to breathe new life into the event and the large, curved HD LED video entrance designed by BaAM Productions would be one of the main design features to really bring a higher level of excitement.”

“At the entrance, the producers wanted the fans to have a feeling of walking through an immersive tunnel, and at the end of the tunnel they would see the world’s largest baseball,” he continued. “Understanding our guests were going to walk inches away from the screen, we needed an incredibly high-definition display in a tight two to three mm pitch configuration, but the product still had to give us the curving aspects needed.”

Bollard and his team took a trip to Nashville, Tennessee to meet with specialists at PixelFLEX. At the factory, they were able to not only able to collaborate on the final design together, but they were also able solve any potential challenges which may have occurred in San Diego during the load-in.

With the curved LED entrance in place inside the San Diego Convention Center, Bollard and the team began the process of loading the custom content created by the MLB design team.

Bollard added: “For the content, MLB Productions created a custom video presentation which played alongside a 5.1 surround sound audio track, and from the moment we turned the screens on we knew we had hit a home run. They were so dynamic and the graphic display looked absolutely incredible. The producers of the show were completely blown away with how the final product turned out and it was exactly what they wanted the MLB FanFest experience to be.”