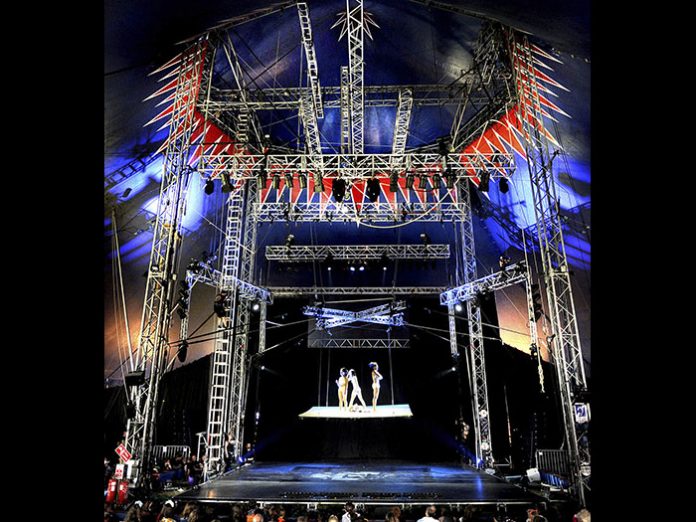 From its humble beginnings in 1970, the Glastonbury Festival of Contemporary Performing Arts has championed performance diversity in all its shapes and forms. The Circus Big Top and the Wow! stages are two examples which perhaps best encapsulate this tradition of diversity at Glastonbury.

At the 1,500 capacity Circus Big Top stage, LD James Loudon specified 10 440W Maverick MK2 Spot fixtures to create stunning spot effects in support of the varied programme of circus acrobatic performances.
“We needed a versatile spot fixture that would intensify and draw attention to the circus performances and acrobatics on stage,” said Sangwell. “The Maverick Spots weren’t just bright, they also gave us plenty of options in terms of colour, gobo effects and zoom.”

As several sides of the Circus Big Top tent were exposed to sunlight during the day, a critical consideration for Sangwell when specifying spot fixtures was brightness. “One of the obvious factors we had to contend with was daylight creeping in and destroying the show atmosphere,” continued Sangwell. “The brightness of the Maverick Spot fixtures ensured that the circus atmosphere was upheld throughout the days.”

During the various performances, the Maverick fixtures, which were hung from overhead trussing, provided the Fineline team with an assortment of looks to be employed in a manner of ways to support the various circus acts.

“We love the reliability and versatility of the Maverick fixtures,” said Sangwell. “, They are good solid fixtures with a good selection of gobos, which allowed us to create a sense of depth for the whole stage area.”

To complement the Maverick fixtures used in the Circus Big Top stage, Sangwell specified a number of Chauvet Professional Rogue R2 Washes. With performers both on stage and performing aerial acrobatics, the Rogues worked in unison with the Mavericks to create the many and varied looks required for each artist.

“It’s very important to us that the WOW! stage looks fresh and that the visual elements evolve and move forward each year,” said Sangwell. “The output and versatility of the Maverick fixtures was a key element in this progression, delivering the punch and energy the WOW! stage is renowned for.”