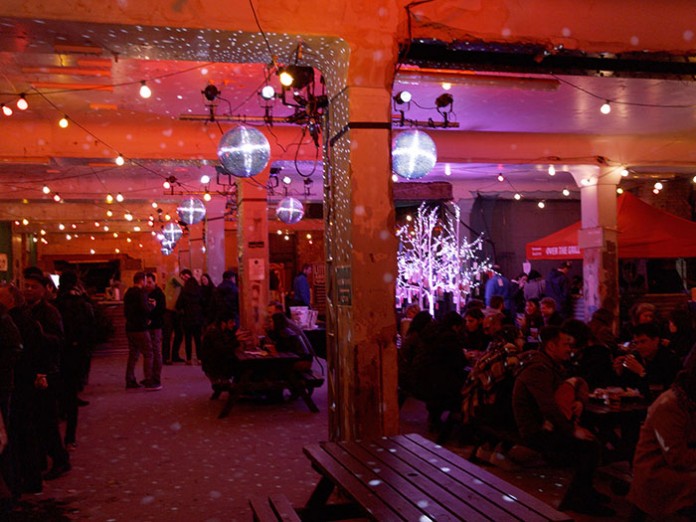 Bristol-based lighting and visuals rental specialist Fineline was commissioned by production company The Fair to add a fabulous lighting ambience to the Islington Square Festival of Culture.

The Islington Square Festival of Culture is a four-day event organised by the company at the heart of redeveloping the former site of the N1 post sorting office into a new and vibrant commercial and residential hub, due to launch in 2017.

Fineline’s Rob Sangwell created a lighting scheme to illuminate a series of indoor and outdoor spaces on the site including a pop-up cinema, a live music stage, a children’s theatre, a community gardening demonstration zone and a markets area, with the overall brief of making it look attractive and special.

The Markets area and the bar were internal and illuminated with a series of well positioned LED PARs, around 40 in total, together with mirror balls adding some sparkle and 250 metres of LED festoon to get visitors in the festive spirit. Other ‘environmental’ lights included Robe Pointes fitted with custom Islington Square logos, which beamed around the walls and floor.

In the Garden demo area, Fineline lifted the general space primarily with LED PARs and battens shooting up the walls and lighting shrubbery and foliage in complimentary colours, whilst also providing practical working light with halogen fixtures.

A large boulevard runs down the middle of the site between the two main buildings with a video-mapped projection show on one side, for which Fineline designed supporting architectural lighting. “The goal here was to bring a carnivalesque feel to the Boulevard,” said Sangwell. A goal that was achieved with the help of another 350 metres, over 1000 bulbs, of festoon lighting, zig-zagged along the space, juxtaposed with IP rated colour-changing fixtures firing up the walls.

The areas adjacent to the video projection show were lit with IP-rated Chauvet LED floods and four more Robe Pointes were installed, again fitted with custom gobos. The building running along the other side of the boulevard was covered in scaffolding, inventively made into a feature with more Chauvet IP-rated LED floods – around 50 units in total.

These floods were all controlled via another Avolites console – Fineline’s new Arena – so funky effects like colour waves and subtle and highly effective undulating sequences could be created to enhance the atmospherics.

Over in the Pop Up Cinema, eight Robe 600E Spots were utilised to throw breakup patterns and texturing onto the ceiling, together with another two Pointe’s with more custom gobos.

The VIP event opening session featured the Royal Philharmonic Orchestra playing to a movie which also required additional lighting, delivered with a selection of carefully positioned fresnel and profile halogen sources and attention to details like ensuring the environment was not too hot and that the musicians had enough light to see the conductor clearly.

House lighting for the cinema was also part of the package plus a couple of strobes used during late night movies like Pulp Fiction, for which they were synched with certain sound effect effects in the movie.

For general branding, Fineline built a trussing goal-post over the main event entrance, next to the development’s marketing suite, to which a large light-box sign – supplied by the organisers – was attached. There were also a couple of other branding structures built around the site.

The challenges, explained Sangwell, were the fragmented nature of all the different installations which made the get-in labour intensive, plus the fact that it was an active building site, so they had be aware of all the applicable CDM rules and regulations during the fit-up and liaise with the site construction team as well as The Fair’s production manager, Alan Crofton.

The three week lead-in period was quite tight for the nature of the project, but short timescales are something Fineline is fully geared up to deal with.

Being central London, there was no parking, so access was a galvanising logistic to work through and the noise control restrictions on the build days were another curved ball with which the Fineline crew dealt efficiently and diplomatically.

“Overall it was a great project, the results looked fabulous, the client was happy and we were all very pleased to have been involved,” concluded Sangwell.