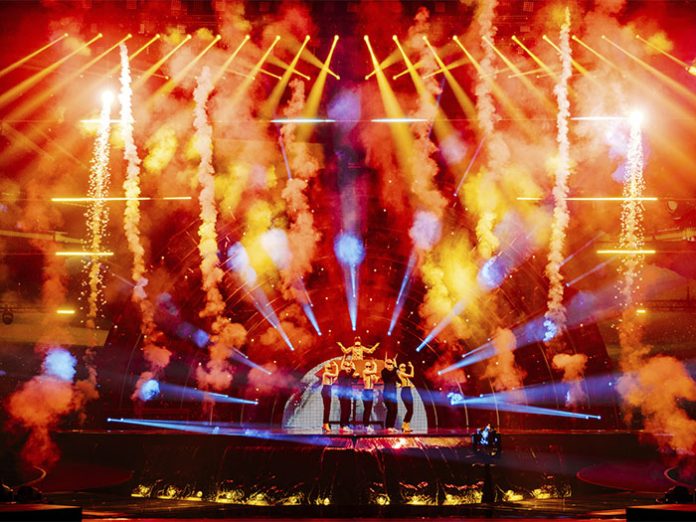 Eurovision returned to its full splendour in Turin for 2022 after the challenges of the pandemic in 2021. Even the continuing horror of war in Europe failed to affect the event, in fact, only serving to intensify the joy, the magic and the music that Eurovision brings to the world every year.

To bring a kaleidoscope of SFX to the stage in Turin, Luca Toscano, CEO of Artech teamed up with Lucas Gerritzen of Pyrofoor de Amsterdam who supplied the FX for the 2021 show in the Netherlands. Artech is a group of companies, that specialise in delivering SFX and show solutions across the globe.

Appointed by this years’ Host Broadcaster RAI Television as the Eurovision 2022 SFX, Pyro and Laser supplier, Toscano sees the event as a glorious celebration of the entertainment industry, a showcase for the best of the best. Across the two companies, more than twenty people were involved in delivering the dizzying array of SFX at the PalaOlimpico in Turin. Flames, smoke machines, Co2 launchers, spark machines, close proximity pyrotechnics were all part of the extraordinary package that were offered to the delegations to enhance and excite their Eurovision performances.

“Each delegation has its own director and artistic director,” explained Toscano. “They have a list of the special effects we can supply for them along with the positions embedded on the stage area. Of course, it depends on what each entry has in mind for their visuals – not everyone will choose to employ SFX – it is entirely up to them, but our team work tirelessly to create the ultimate visual extravaganza for each and every artist.”

The laser element of the show came via 6 Kvant Spectrum 30W and 4 Clubmax 10W. The opening and closing of the TV show featured a special laser FX can could only be visualised by the TV audience watching from home. Artech FX Laser Operator, Pieterjan Ruysch commented: “Laser banding is a live camera effect where the laser creates tunnels of ribbons or bands in mid-air. We move a laser dot so fast that the laser spot moves as the camera updates its image, achieving ‘magical’ laser ribbons in mid-air. It may appear like AR (augmented reality) but it is the laser doing the work.”

The visual splendour on show at the PalaOlimpico is a testament to the resilience and determination of the entertainment industries and to prove it is back with a massive SF bang. Among the twenty strong team in Turin were Vitor Machado working with the pyrotechnics under the supervision of Paul Philipsen, SFX operator Marco Malatesta, Pieterjan Ruysch for lasers, Fabio Cimetta in charge of logistics and technical stage manager Gaetano Corriere.

As Toscano said: “Eurovision is the celebration of our industry and was one of the most challenging projects we’ve ever achieved at Artech. It was a wonderful opportunity to create a mixed, dynamic crew and cement our teamwork with Lucas Gerritzen, Managing Director & Owner at Pyrofoor de Amsterdam.”