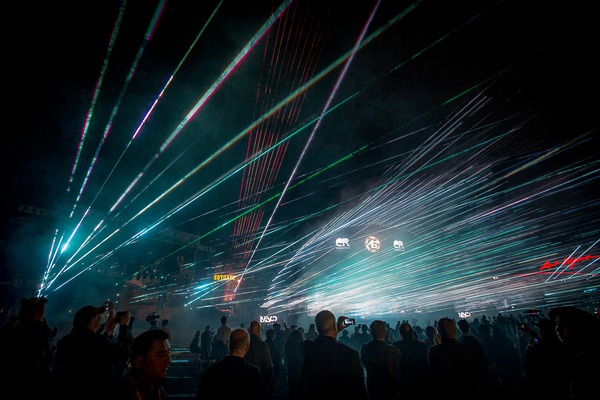 “I’m pleased to confirm that ER Productions did indeed manage to set a new Guinness World Records title for the Largest Laser Show, which now stands at 314 lasers. My congratulations go out to all those who took part.”

Over 12 tonnes of equipment valued at approximately £2.6 million – including 11km of cable – was used during the show, which was held at the Las Vegas Convention Centre. Due to its proximity to the McCarran International Airport, a 100m by 15m termination wall was erected to ensure that no lasers affected aircraft using the popular airport. During the final and crucial seven-minute closing sequence, an enormous 1,377W of laser power lit up the Nevada skyline.

The laser show took weeks to design and 72 hours to set up for the world record attempt. Laser fixtures from ER Productions U.S. base in Las Vegas were used to beat the unofficial world-record set by the company back in 2016.

Ryan Hagan, co-founder of ER Productions, said: “We are delighted to celebrate our tenth anniversary with such an incredible laser show and by making our way into the GUINNESS WORLD RECORDS books. We’ve worked with many fantastic companies, events, and performers throughout the years but creating such a memorable showcase, that celebrates all we have achieved in the laser industry, has been a real highlight.”

Marc Webber, co-founder of ER Productions commented, “It’s an incredibly proud moment for the entire ER Productions team and for me, a decade since founding the company. As the home of our US headquarters, Las Vegas is a special place for us and now it will hold even greater significance in what we hope will be a long future designing and supplying innovative laser solutions.”

ER’s Andrew Turner, who designed the show with Lawrence Wright, General Manager of ER Productions US, added: “We were lucky enough to have three fantastic stage structures courtesy of AG Productions to rig lasers to, which helped us increase the fixture numbers exponentially. From a design perspective, the music was key. As a company, we’ve worked with so many great artists across a wide range of music genres – we wanted to incorporate a variety of programming techniques into the design to illustrate how lasers can be used in different contexts.”

Turner and Wright used a combination of ER Productions’ proprietary lasers in the show, which included blue Burstbox fixtures, Beambursts, BB3s and Laserblades. The rig was completed with some of the company’s newly-launched fixtures, including Storm, Lynx and Kinekt units, which were brought to market in 2017. The show was controlled centrally from front-of-house using three Road Hog 4 consoles and Beyond laser software.

David Johnson, Managing Director of Live Design International, concluded: “We were very excited to be part of this historic event. It is not often that you can host an official Guinness World Records title attempt with an award-winning laser production company. We know that people will be talking about this experience for years to come.”