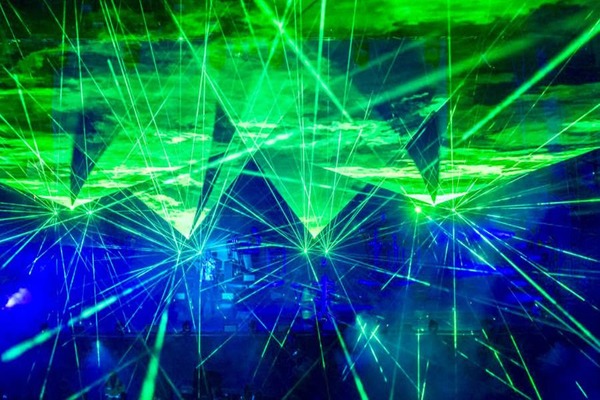 To celebrate the 10th anniversary of ER Productions, founders Marc Webber and Ryan Hagan, discuss the future of the industry and their Guinness World Record attempt for the Largest Laser Show at LDI 2017.

Q: You founded ER Productions 10-years ago, how have lasers changed in that time?

MW: The biggest change in the last 10-years is the availability of diode technology, which was a new innovation when we started the company.  Back then many laser companies were still using water-cooled lasers, which were clunky and unreliable. Because of the technological limitations, it wasn’t feasible to use loads of lasers in a live show environment and mirrors helped to create big laser effects. But, it wasn’t ideal.

Laser diode technology certainly helped to transform the industry – early adopters like ER Productions began supplying lasers that were infinitely more reliable, safer, smaller and had much lower power consumption than their predecessors. Continual improvements in diode technology means lasers have become brighter, smaller and more versatile; added to which, the number of lasers used on shows has increased exponentially.

Q. What’s the secret of your success?

RH: Both Marc and I started ER Productions because we wanted to be the best at what we do. Our goals are often ambitious, but it’s what drives us forward and keeps our technology at the cutting-edge of the industry. We set the bar very high and invest a lot of time into training our crew and making sure they think big, which is central to our ethos!

Q. What are you doing to celebrate your 10th?

MW: For our birthday we wanted to do something really special that shows the industry what ER Productions is about. And, what better way than to attempt the world’s largest laser display in Las Vegas – the location of our US headquarters and second home!

Q. What inspired you to attempt to set a world record?

RH: We started thinking about attempting an official world record last year, after working on a show in Milan to launch the Samsung Galaxy S7. We used 220 laser fixtures for this award-winning project and inadvertently set an unofficial record for largest laser display…which we intend to smash in Las Vegas next week.

Q. Why did you want to celebrate in Las Vegas?

MW: Las Vegas is the perfect place to put on a show of epic proportions. And, it’s a chance for us to see friends and colleagues across the pond who are attending LDI, one of North America’s most popular exhibitions. Las Vegas has been very kind to us, which is another reason we wanted to celebrate here. We opened a permanent office and warehouse in the city 3-years ago, investing a significant amount in new stock to match our UK offering and recruiting/training local technical talent.

Q. Tell us about the team working on the show?

RH: Given how busy we are supplying other shows around the world, coordinating a laser show of this proportion has been a juggling act. But, the team has really pulled together to make it happen.  We have Andrew Turner project managing the show but all the show design, from the music to plotting an obscene number of lasers, has been a team effort.  Because of the scale of the laser show, we have three programmers working across four Pangolin Beyond control platforms and two Full Boar 4 consoles from High End Systems. Lawrence Wright, General Manager of our Las Vegas HQ, will helm the programming team.

Q. What makes a great laser show – is it the fixtures, the power or the designer behind it?

MW: Although power is important, a great laser show is the result of a great design.  Projector type is also extremely important, which is why we design and manufacture our own. Our laser designers contributed to the overall development of our projector range, bringing their knowledge and experience out in the field back into our R&D.  As laser system designers, we understand the value of that time on the road, because it keeps the tools of our trade one step ahead.

Q. For anyone not attending LDI 2017, can the world’s largest laser show be watched live?

RH: Absolutely! Our Production Assistant, Hannah Williams, has been has been coordinating closely with the video crew to ensure that we have a direct feed from the FOH camera, so we can stream the big moment live on the ER Productions’ Facebook page. It’s a significant step for us as a company and we want to share it with as many people as possible.

Q. What technology can we look forward to seeing at LDI 2017? (give us an insight into the demo room kit as well as some of the new tech innovations)

MW: We’re not going to give anything away about the world’s largest laser show – it’s a birthday surprise.  However, we will have our proprietary product range in suite N102 of the Las Vegas Convention Center, which we’ll be demonstrating to visitors for the duration of LDI 2017.  This includes Cyclone, our BB3, the Laserblade and our very latest fixture, Kinekt, the world’s first modular laser system.  It’s all exciting gear at the very cutting-edge of laser system design.

RH: We’re just as committed to bringing new products to market that simplify and refine laser production as we were 10-years ago. As well as continuing to grow our US operation, we have several new innovations in development, which includes a new control system that we’re working on with Pangolin, a range of new fixtures, increasing our FX offering and launching a top-secret technology that will revolutionise laser alignment. With laser rigs now matching those of lighting, we’re always thinking about ways to help lasers integrate more fluidly into a show’s rigging scheme.