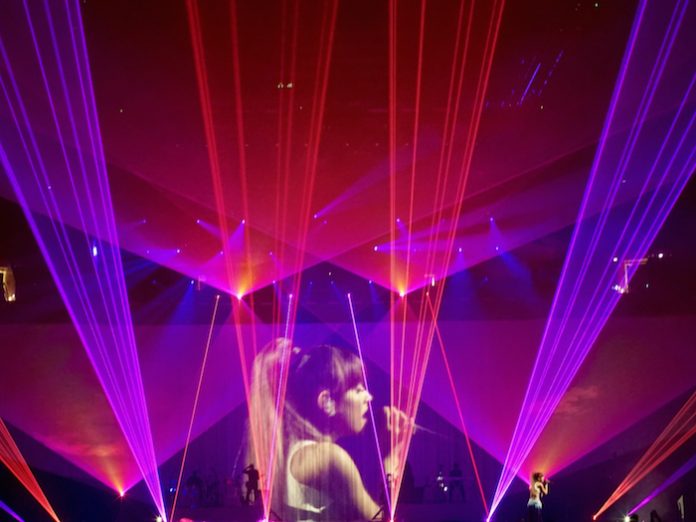 After a month in rehearsals, ER Productions has gone on the road with Ariana Grande. Marc Webber, co-founder of ER Productions worked closely with lighting designer Sean Burke to create a bespoke laser design for the arena tour, which was painstakingly time coded and automated during rehearsals. “This attention to detail during the rehearsal period always pays dividends when you’re on tour” commented Lawrence Wright, who programmed the show for ER Productions. “It results in a perfectly timed show night after night”, he continued.

Webber, who was given creative freedom with the laser design, specified twelve DMX controlled BB3 lasers, which are exclusive to ER Productions, and four Tripan scanning systems to create a striking geometric backdrop in hues of white, blue and acid pink for Grande’s performance. The compact rig has been designed to make light work of load ins and dismounting for Ben Couch, ER’s laser operator and technician for the tour. The Tripan fixtures are operated using a Pangolin FB4 system and work seamlessly with the DMX controlled BB3 units, both of which are controlled and operated directly from ER’s lighting console.

To highlight the suite of lasers, Viper deLuxe and Unique Hazers provide the show with all-important atmospheric effects and are the perfect smoke solution for a large arena environment.

“It is a pleasure to be working with Sean and PM Omar Abderrahman again. Having been brought on late in the design process Sean and I had to work hard to get the lasers placed into positions that worked without altering any other show elements. Although it is a relatively small laser rig, the addition of ER Productions BB3 lasers makes it feel much bigger. Lawrence has done a great job on the programming, using multiple zoning to achieve an impressive laser look”, concluded Webber.