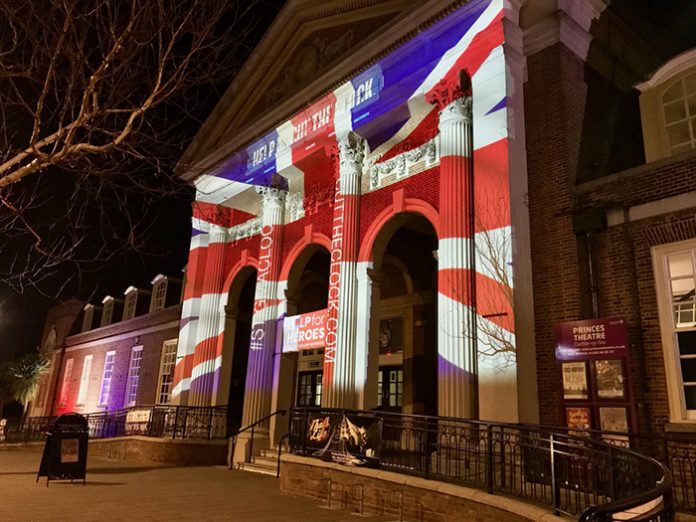 Help for Heroes is the leading charity for the British Armed Forces community. Their belief is that those who put their lives on the line for us, deserve a second chance at life, and they provide lifetime support for the armed forces community and their families.

In December 2018, the charity commissioned a study to look at how long it takes veterans to reach out for mental health support. The results suggest that on average, they take four years to come forward. With the end goal of lowering this stigma faced by veterans, Help for Heroes launched the campaign ‘Cut the Clock’, designed to raise awareness of this issue and encourage fundraising activities to enable the charity to provide help to those that need it, much sooner.

To help physically raise awareness for their campaign, Help for Heroes decided on a simple but effective technique of projecting their campaign messaging onto landmark buildings. The ‘stigma clock’, a visual countdown of the four-year duration the average veteran waits before seeking mental health support, would be lit up on different buildings across the UK to help initiate this campaign.

Over the years, projecting onto buildings has been a popular method in raising awareness for special occasions and promoting political, commercial, charitable or other causes and incentives. Finding the right expertise is paramount to a successful display, and after agreeing that improvements could be made after their inaugural projection onto the Tower of London, Help for Heroes decided to take a new and more elaborate approach to bring their campaign to life for the remaining buildings: St Edmundsbury Cathedral, Colchester Castle and Clacton Town Hall.

Motion Mapping was contacted by Help for Heroes to create a fantastic spectacle at these three venues. With a rich professional background in projection mapping, from weddings and launch events, to giant cakes and even Stonehenge, Motion Mapping was happy to exceed the charity’s expectations.

As with many charity-based activities, there were no resources available for Motion Mapping in carrying out this activity, so relying on a smooth logistical process was paramount. As video mapping is a collaborative process, Motion Mapping’s first task was to identify what equipment they could be loaned, and in the same charitable spirit with which they took on the project.

Global AV equipment rental service PSCo, one of the country’s biggest rental providers of installation projectors, was contacted by Motion Mapping to lend their support towards this project. PSCo supported by providing one Epson EB-L1505UH projector so that Motion Mapping could carry out this projection mapping, as a long term relationship had already been built between the two companies.

“Activities like this are always exciting to be a part of and it was great that the charity recognised that this was more than simply a ‘point and project’ activity,” said Stuart Harris, creative director at Motion Mapping. “Our experience of working closely with Epson and PSCo gives us a strong infrastructure that allows us to materialise requests like this smoothly and effectively, and we were happy to pull together for this project in order to create something memorable.”

Using Green Hippo media servers, Motion Mapping then got to work by developing a storyboard of content offsite in order that it could then be executed onsite. This utilised multiple software packages such as After Effects & Cinema 4D to create content. A rough model of each location was then created to work within Green Hippo’s Shape programme for 3D projection mapping. “The versatility of the Green Hippo Amba media server meant that when we had to change projection location on arrival, we very quickly adapted content and mapping to a new location which isn’t so easy with some of its competitors”, said Harris. “Using just one of the Epson 12,000 lumens projectors gave us a vibrant, clear picture even when street lights couldn’t be turned off.”

Ann Scott, regional marcomms officer at Help for Heroes, said: “We were initially concerned at the prospect of using one projector to deliver effective projection on the buildings, particularly St Edmundsbury Cathedral, which was so very high for just one projector. I was dubious whether the Epson projector could deliver a clear and bright image on the remarkably high spiral. But low and behold it came out looking beautiful and the message came through really well time after time.”

The projected displays put on a grand spectacle for the three different communities to marvel at, with representatives from each location expressing great interest in commissioning projection mapping experiences for local projects and activities.

“We’re always proud of the results delivered by Motion Mapping using our projectors and we were delighted at the support given to the charity by both them and PSCo,” said Sharon Head, sales manager for professional displays at Epson UK. “12,000 lumens is a fairly modest level of brightness for creating a grand public spectacle, but the success of this activity just further proves the colourful results that Epson’s 3LCD technology delivers.”