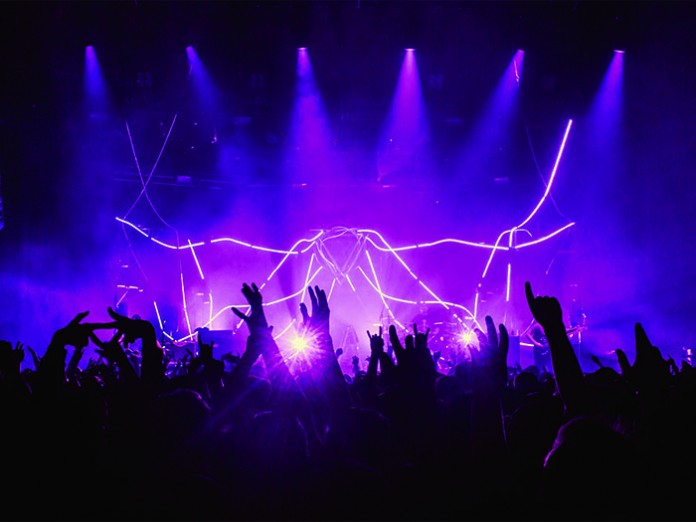 Following the release of their critically acclaimed 2014 album, The Mindsweep, British post-hardcore troubadours Enter Shikari returned to UK stages in February 2015 to deliver an eclectic mix of punk rock, dubstep, and drum ‘n’ bass, all tied together by the band’s famously energetic show design. TPi got acquainted with the team behind the tour.

Having emerged from the emo furore of the early noughties, Enter Shikari quickly distinguished themselves as a band with staying power. Determined to show they were capable of more than just teen angst and hairspray, the band has spent the last eight years garnering an impressive list of plaudits, including Best Live Band and Hero Of The Year wins at the 2012 Kerrang Awards, as well as forming their own independent record label – Ambush Reality – in 2007.

Today the Hertfordshire four-piece are still going strong, combining rabble-rousing pop music with darker and more diverse influences, drawn from the cacophonous mathcore stylings of Converge and The Dillinger Escape Plan, and tinged with The Prodigy’s belligerent electronica.

Enter Shikari’s Manager Ian Johnsen, described his first encounter with the band back in 2007: “I saw them at the Barfly in Camden, they were supporting a band whose name escapes me, but it soon became apparent that 90% of the kids were in attendance to see them. I dropped them a line after the show, we went for a pint… and here we are, nine years later. They still haven’t found me out!”

Commenting on the show’s production design, Johnsen said: “I think this tour offers the fans something different in terms of a look. A lot of the bands that operate in the same world as Enter Shikari don’t seem to push the limits in terms of production. But I think it’s really important to put across a strong visual style.

“I’m nowhere near technically-minded enough to take on a production manager’s role,” he continued. “The band had a few rough ideas and we talked them through. I made some sketches in my notebook, but that’s about as much input as I’m able to have on production. Andy Russell, who has been the band’s FOH Engineer since 2006, has recently taken on the PM role, and the Lighting Designer, Steve Bewley, is able to refine the band’s ideas into what you see on stage.”

The inspiration behind the tour’s meticulous lighting design came from Enter Shikari’s most recent album artwork, which features images of the electrical pulses within the brain, and allowed Bewley to use huge colour bursts and elaborate strobe effects to generate an immersive visual environment around the band’s idea.

Bewley, who has worked with the band since 2007, explained: “The initial concept for the tour’s design was all about the concept of ‘the mindsweep’. The head that forms the basis of the band’s album artwork became the backdrop for the tour, and the brain, which is Enter Shikari’s logo, was incorporated as a subliminal element of the design.

“As with every Enter Shikari show I’ve ever worked on, the aim was to create a big, in-your-face, fast-paced lighting design that could keep up with the band’s energy,” Bewley continued. “I used a variety of different techniques to create a hybrid that would reflect the band’s music, with their diverse mixture of genres.”

To achieve this, Bewley specified 44 Ayrton Magic Blades, which were positioned on a horseshoe-style frame, surrounding the band from the rear to the downstage line of the backline, which doubled as support for 30 of the six metre Light Initiative Intelliflex LED strips: “What really clinched IntelliFlex for us was that you can video-map it,” Bewley explained. “This meant we could create content that would look like the neural pulses – it was fantastic to see my idea so well realised. We created 12 metre strips and weaved them in-between the blades and metal frame,” continued Bewley, “to create the ‘organised chaos’ the band required.”

Bewley also specified six moving-head Alpha Spot QWO 800’s from Clay Paky, which were positioned at the rear to back light the band and create depth: “I used the Alpha Spots to light the band from the back of the stage,” he explained, “which also leant an industrial look to the metalwork. I positioned six Solaris LED Flares way back in the back and used them to create strobe effects with huge colour bursts.”

The LD also used six PATT 2013 tungsten fixtures from James Thomas Engineering, which helped to provide parts of the show with a softly lit, washed out feel, which was a nice contrast with the new technology in Bewley’s rig. For control he used two MA Lighting grandMA2 Light consoles for the tour and commented: “I love these desks! They’re so versatile and easy to use. They’re rock solid. All of the features on these desks have been engineered perfectly, from Art-Net to timecode, both of which came in handy during this tour.” Bewley programmed the grandMA2 Lite to trigger a Green Hippo HippoPortamus media server to deliver the content via Light Initiative’s LED control to the LED neural pathways. 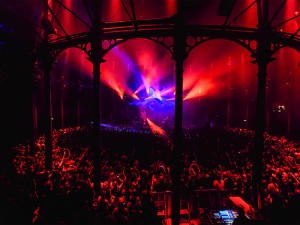 FOH Engineer Andy Russell first met the band nine years ago, while working as the in-house Sound Engineer at Glasgow’s indie hotspot King Tut’s Wah Wah Hut. “The guys were headlining a show on their 2006 tour and they weren’t touring with a Sound Engineer,” Russell said. “So I offered to mix the show and the next day I got a phone call asking if I was available to do the rest of the tour with them. I jumped on a flight and met them in Cardiff for the next show, the rest is history!”

Russell has also recently taken a production management role with the band. “The band merge so many genres of music to create their sound, from drum ‘n’ bass to punk, with acoustic guitars and pianos thrown in, which means my FOH mix is very diverse throughout the set.”

In order to cover such a broad range of styles, Russell needed a desk that could deliver on both functionality and sound: “I chose the Midas PRO2 and have the Midas DL251 fixed format unit for any I / O at the stage end. In my opinion, the Midas PRO Series desks are the best sounding digital boards on the market and the PRO2’s functionality and size made it the perfect option for me on this tour.”

The Midas PRO2 desks were provided by Patchwork London: “Patchwork London is the audio company that our Monitor Engineer, AJ Sutherland, is a director of, so he was able to put together a nice touring control package for us, which came in on budget.”

For microphones, Russell deployed Sennheiser e604’s on the snare bottom, second snare, rack and floor toms, with two Shure 91As inside the kick-drum and Sennheiser E945’s for all of the band’s vocals: “The Sennheiser e945’s sound great, they’re nice and clear and have a tight pickup pattern which helps with spill from the cymbals,” he said.

“Liam ‘Rory’ Clewlow (guitar) and Roughton ‘Rou’ Reynolds (lead vocals and guitar), have recently moved over to using Kemper Profiler amplifier heads for their guitar tones, which sounds incredible,” Russell enthused. “They have great cab emulation options, so I’ve been taking the stereo DI out from both Kempers, which sounds amazing and creates a really ‘in your face’ sound.”

Russell used the in-house PA for Enter Shikari’s London Roundhouse shows, which was supplied by London’s Britannia Row. The rig consisted of 14 L-Acoustics V-DOSCs with four dV-DOSCs for down fills on the main hangs, and 12 SB218 subs on floor. Additionally, dV-DOSCs and ARCS were used for in fills and out fills. “The PA sounded great and the crew were as friendly and helpful as ever,” Russell concluded. “I always have a good show at the Roundhouse!” 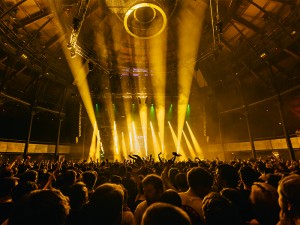 Russell was also responsible for bringing AJ Sutherland, the band’s Monitor Engineer, onboard: “Andy and I knew each other through some mutual friends and some touring crew groups on Facebook,” Sutherland explained. “We had an email thread going about something completely different and this came about as a side note. I had a meeting with Tour Manager Keith Reynolds and my predecessor in November 2014 and did my first show in December.” Sutherland selected a GLD-80 console from Allen & Heath, after working with it on various projects prior to the tour: “Allen & Heath have nailed the midscale console market,” Sutherland said. “The I / O, the functionality and the audio quality are perfectly suited to the demands of high level productions and it’s small enough to fly around the world and fit on cramped stages.”

As well as using custom fader layers and iPad control, Sutherland was keen to explore some of the GLD-80’s more unusual features: “I used a Dante expansion card to capture a multi-track recording of every show and a couple of GoPro cameras for the video. Enter Shikari’s shows are different everyday so it’s great to have a record rolling all the time,” he said.

“I’ve also been sending MIDI commands from the playback laptop to the GLD to automate certain functions, which happen at the same time every day. This allowed me to do things like go on stage and unplug the acoustic guitar the moment Rou is finished playing, and still be confident the desk will mute that channel without banging in the Sennheiser G3 IEMs. Allen & Heath is always my first choice of console to tour with. They are so fast and easy to use, which is vital on such a high-energy show. Manufacturer support is really important to me and Allen & Heath are some of the best around.”

With a 15-date US tour on the horizon, Enter Shikari are showing no sign of slowing down, and as the UK leg of the tour has been met rave reviews, Manager Ian Johnsen has reason to be pleased: “Without sounding too much like American Airlines,” he said, “We know that people have a lot of choice when it comes to entertainment. It’s our duty to give them as much value as possible. So I’m glad they chose to keep returning to fly Air Shikari, for all of their business and pleasure needs!”