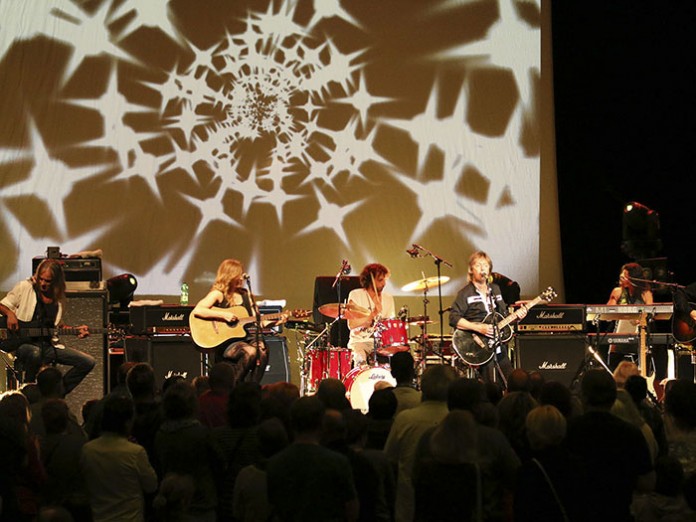 It was the first time she’d worked with the west London-based lighting rental specialists, which she chose because: “After a few initial phone conversations I had complete confidence in the company to deliver what I needed, and they were very helpful and friendly.”

Project Manager, Noreen O’Riordan, commented: “It was actually our second tour with Chris Norman as a supplier and our first working with Amy, which we found really interesting. We love to see new and upcoming LDs doing well, and share our many years of knowledge and experience in assistance. We will all be hearing a lot more of Amy.”

Chris Norman initially found fame in the 1970s with UK soft rock band Smokie, known for their distinctive three part vocal harmonies. During the 1980s he became a leading songwriter and producer, writing successful songs for a other artists, and his solo performance career has continued simultaneously.

As a seasoned performer and a consummate professional, he has some very strong ideas about how he wants the stage show to look.

Barnett started work with the artist early in 2015 and the lighting design for the European tour was based around a front and back truss, plus a mid stage truss that facilitated a kabuki drop at the top of the show. At some venues, for practicality and speed and when there was a good overhead lighting rig, the in-house air system augmented with their own floor package.

“When we discussed lighting, Chris said he wanted it to look ‘big and amazing,’” explained Barnett, who then started planning the lighting scheme with this in mind and to fit the budget and the available truck space.

“This was one of the areas where Entec’s advice was extremely helpful.”

The front truss was loaded with two Source Four zooms for key lighting, eight fresnels that provided some classical theatrical style front-wash looks, a Barco R10 projector, also from Entec, was also rigged in this and projection ran right through the show onto a screen outrigged from the back truss.

On the floor were another six MAC 700’s and six Robe LEDWash 600’s, used for lower level lighting and effects. Barnett explained: “Having light sources in this position can really increase the audience’s perception of the performance space and make an expedient rig look a lot larger than it actually is.”

Four MAC 700’s upstage were varied in height off the deck on stands and flightcases, with four LEDWashes actually on the floor and another two of each fixture downstage both sides of stage.

The electronic kabuki reveal took place after a musical intro at the top of the set that segued into the band playing live and as Norman entered the stage, the cloth fell away to reveal him silhouetted by the upstage spots.

Entec also supplied a DF50 hazer, and it was reported that one of the daily challenges was to use this to create an invisible haze around the stage and venue.

For lighting control Barnett chose a ChamSys MQ200. The colourful and stylish show accommodated the various specific requests from Norman as well as plenty of ideas from Barnett who, in addition to all the show cues, had a busk page set up on the desk to experiment with new looks and some ‘live’ evolution as the tour progressed and settled into its groove.

Entec supplied Mark Wood for crew, with whom Barnett really enjoyed working: “Like everyone associated with Entec I have met, he was fantastic.”