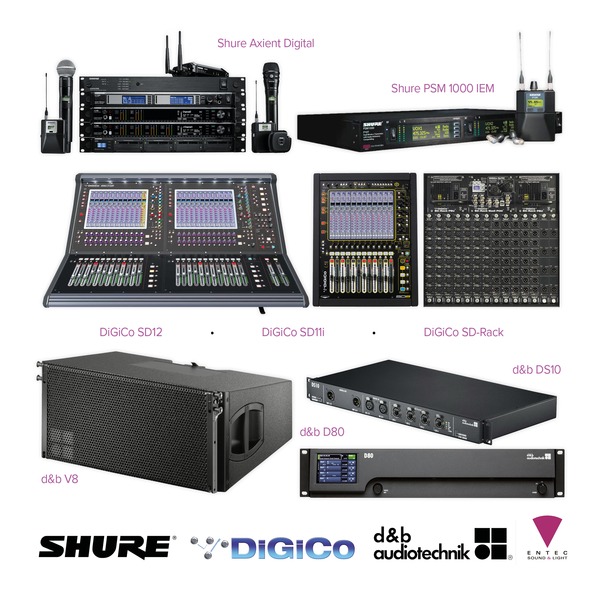 “Maintaining a cutting-edge inventory has always been a priority for Entec’s sound department and never more so than in today’s highly competitive market,” stated Jonny Clark, Entec’s Head of Sound. “Strengthening our relationships with some of the industry’s biggest and most forward-thinking technology brands is also very important to us, especially from a customer support perspective.”

Clark commented: “Axient Digital is brand new, having been launched in April at NAB in Las Vegas, and Entec is proud to be one of the first rental companies to invest in such a large quantity. An increasing number of the projects we undertake have become very reliant on large, multi-frequency wireless systems and there has been a need to change to Axient Digital from Shure’s older UHF-R platform in order to provide dependable, high-quality frequency access in an environment of continued RF spectrum pressure. Our related purchase of 10 dual-channel Shure PSM 1000 in-ear monitoring systems is obviously also a reflection of our growth.”

From the DiGiCo portfolio, Entec has elected to invest in a pair of 72-channel DiGiCo SD12 consoles, a super-compact SD11i model and 2 SD-Racks. These purchases follow the acquisition earlier in the year of an additional SD7. Said Clark: “In our experience, DiGiCo consoles remain as popular as they ever were and these purchases reflect customer demand as well as our ongoing faith. Ever since the SD12 was launched in January, we have been swamped with enquiries so it’s gratifying that we can finally offer this console along with other favourites in the DiGiCo range.”

A loyal and renowned supplier of d&b audiotechnik systems since 1995, Entec’s workload pattern has necessitated a further investment in 20 d&b V-Series V8 3-way loudspeakers, 32 D80 four-channel power amplifiers and six DS10 audio network bridges. “The V-Series from d&b covers our work in mid-range to smaller venues,” explained Clark. “Due to the sheer amount of projects we are handling within that area of the touring and event market, we simply needed to increase our stock of V8s and associated amplification and network management.

“All of this new equipment is already being deployed on tours and a variety of one-off shows, and I think it’s a reflection of our ‘can-do’ attitude that we are so keen to respond to demand with this scale of commitment.”

Alongside its new inventory acquisitions, Entec has entered into an agreement with Colorado-based Brown Note Productions to give d&b audiotechnik’s next generation loudspeaker series its touring début. Designed for large-scale arenas, stadiums and festivals, GSL – part of the new SL-Series – is currently making its first appearance on the European leg of Gorillaz’ Humanz world tour.

“We are in the early stages of formalising a Transatlantic relationship with Brown Note, who are Gorillaz’ American loudspeaker provider and our counterpart with the band,” concluded Clark, “and we hope to make a joint announcement in the near future.”