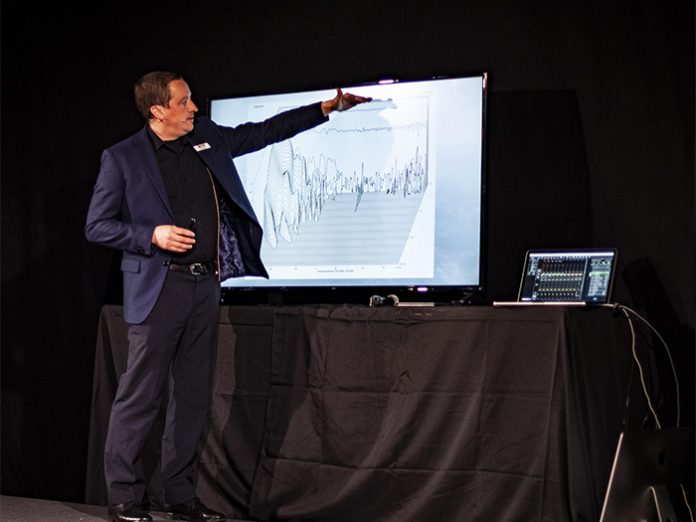 SARM Music Bank rehearsal studios in London recently hosted a major series of demos from UK loudspeaker manufacturer, EM Acoustics and Out Board, immersive spatial reinforcement and performer tracking specialists. In the spotlight was the Reference Series R10 point source loudspeaker from EM Acoustics – seen for the first time anywhere at ISE 2020 – and the acclaimed HALO-B medium format line array. Out Board showcased the new HARDCore FGPA processing for the TiMaxSoundHub and the all-new TiMax TrackerD4 precision stagetracking for live performer vocal localisation and multimedia effects control.

Held from 3-5 March, EM Acoustics’ Mike Wheeler deemed the event to have been a huge success with high attendance figures and, more importantly, extremely positive reactions from the industry.

Renowned sound designer, Sebastian Frost, whose credentials include plays, musicals and operas the world over as well as live events and installed visitor attractions, was very taken by what he heard: “I was so impressed by the R10, I’ve already specified 10 of them for a major new production that will take place later in the year…”

Bobby Aitken, another award-winning West End and Broadway theatre sound designer, was equally impressed with the new Reference Series loudspeakers: “The new R10 point source loudspeakers sounded great and I’m really looking forward to spending some time with the upcoming R8s. The combination of a rotatable horn and the ability to swap the horn between two different included versions will make it a really interesting loudspeaker for theatre use.”

Mike Wheeler is delighted with the response to the demos. “Not only did we have a lot of people through the doors, but they were all figures who influence our industry – sound designers, rental companies, engineers – and reactions were universally positive, both for our products and the Out Board TiMax gear. Our event predated the worst effects the COVID-19 epidemic; this is clearly a challenging and unsettling time for live entertainment, and our thoughts and best wishes go to our colleagues and friends throughout the industry. We remain positive, and we’re looking forwards to bringing the outstanding and highly effective Reference Series to market once these clouds pass.”