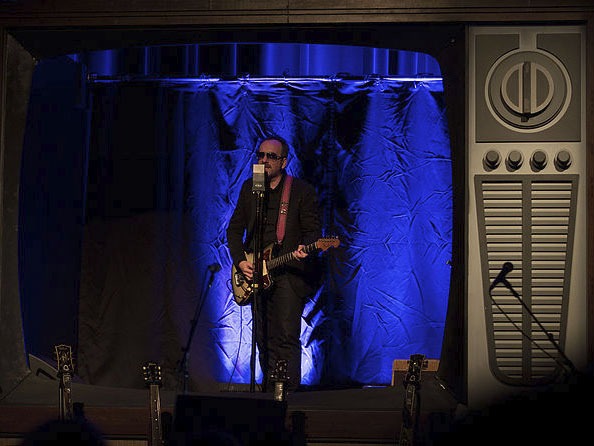 FOH engineer Fernando Alvarez details why the 44-A is ideal for the iconic singer-songwriter’s live performances.
On his recent Detour solo tour, Elvis Costello accompanied himself on guitar as he sang his trove of hits. For a segment in which he performed inside a set designed to look like a life-size vintage television screen, he needed a microphone that not only offered excellent reproduction of his unmistakable voice, but that would complement visual look and feel of the era. Costello and his engineer Alvarez, who has run FOH sound for the Dixie Chicks, Paul Simon, James Taylor, Katy Perry, and many other stars, chose the Cloud Microphones 44-A Active Ribbon Microphone.
“The 44-A has been a wonderful piece of gear,” said Alvarez. “It’s a piece he loves because, first, it gives him a great show aspect. It’s an aesthetic he’s been looking for for years – something that reminds him of what his father might have used when he was growing up. It’s the piece the press takes pictures of, and perfect for the sound and look he’s going for.”
http://cloudmicrophones.com

Kaskade Rings in the New Year with L-Acoustics