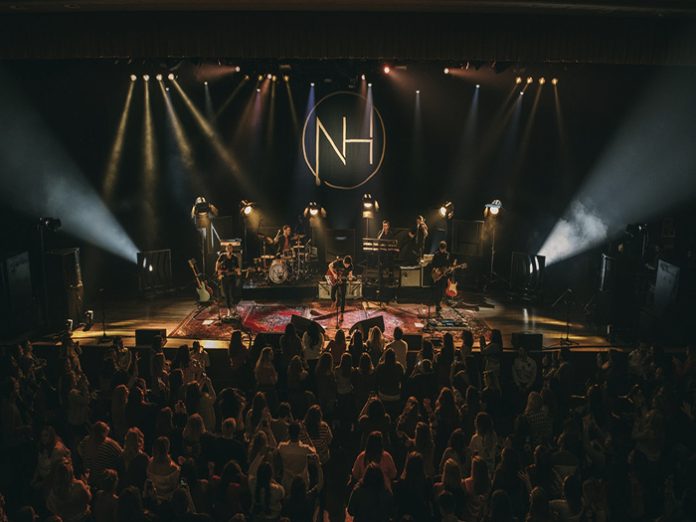 Singer/songwriter Niall Horan may be best known as a former member of One Direction, but the Irishman has held his own as a solo artist on his current Flicker Sessions tour. Special Event Services supplied lighting for a string of North American tour dates in 2017, a package that included Elation Professional Chorus Line 16 pixel bar wash luminaires.

Headlining his own show on a stage decorated with an ‘NH’ backdrop, the Flicker Sessions tour was the artist’s debut outing. Production, lighting and scenic design for the tour was by UK-based production design company Okulus with lighting direction by David ‘Bickie’ Lee. Creative direction for the tour was by Modest Management and Okulus.

The Chorus Line 16 pixel bar fixtures, 42-inch long colour-changing pixel bars, played a special role from static positions behind the risers. Projecting high and low through the band or aligned to shoot above musicians’ heads, they gave what lighting director Lee described as an unbroken blade-like look. “From behind the risers they provided a wall of light, a kind of break-through-the-musicians look,” he said.

The Chorus Line 16 houses 16 Elation Professional powerful 40W RGBW LEDs that allows for use on large stage performances – like on last year’s Tears for Fears tour – and includes enough punch to compete with bright LED video screens. “I loved their intense power,” stated Lee. “I don’t think there is another LED array about that can deliver the punch that these can.”

The Elation Professional Chorus Line fixtures (which are available in 2 different lengths) can fulfil a number of purposes in a single show and also have full pixel control for direct eye candy looks. Motorised zoom optics from 4° to 40° mean it can be used to light set objects and cycs and a 220° tilt motor function lets designers position or move the unit dynamically during a show.

“The zoom in the CL16’s is also killer,” Lee added. “You can take the fixture from full fluffy zoom to a super sharp almost pinspot type sharp hard-edge beam.” On Niall Horan, the Chorus Line 16s were floor-positioned 10 wide across the back of the stage as upstage as possible.

Special Event Services, which holds 30 of the Elation Professional Chorus Line 16 fixtures in stock, was audio and lighting vendor for the North American run (29 October – 22 November) of the tour. The company also had the dynamic pixel bars out 22 September – 22 October on a tour by American rockers PVRIS, where 24 units were used as back light and side key lights. The PVRIS tour was designed by Okulus and operated by Joe Watrach.