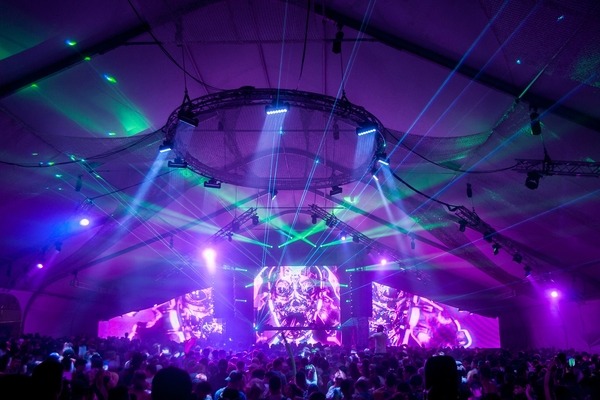 Californian production company, Stage-Tech dipped into its inventory of Elation Professional lighting gear to deliver a lighting package for the Hard and Pink stages of this year’s Hard Summer Music Festival.

Held August 5-6 2017, the popular rave event celebrated its 10th anniversary, by paying homage to the artists who have filled the lineup over the past decade, including top acts Snoop Dogg, Bassnectar, DJ Snake, Zeds Dead and Justice.

Stage-Tech has been involved with Hard Summer for the last 8 years, handling design, lighting, video, and staging for both the Hard Stage and Pink Stage. “The venue change just weeks before the festival meant we had to reinvent the design to fit into an amphitheater atmosphere instead of a larger outdoor venue,” commented Stage-Tech’s Charley Guest, lighting designer for the Hard and Pink stages and owner of the Santa Fe Springs-based company. “The versatility of the Elation gear, the variety of looks you can create and the hybrid ability of the luminaires, all made the changeover process easier.”

On the Hard Stage, a large outdoor stage and the festival’s main performance space, Platinum FLX hybrid moving heads and Platinum Beam 5R Extreme beam lights were used to create a heavy beam feel from the center of the stage outwards. Guest used the multi-functional aspect of the 470W 3-in-1 FLX fixtures fully by shifting to spot mode for mid-air profile looks and to wash mode for occasional floods of colored light. “The FLX really has punch and its versatility as a beam, profile and wash light really showed through on this project,” said Guest. “Specing the FLX allows us to use fewer lights but still get as much effect as we would by using many more fixtures. They were used for the majority of the beam effects and created much of the impact.”

The Hard Stage setup also included ACL 360 Matrix LED moving panels, as well as Lumina Strips. Mounted on the downstage truss the ACL 360 Matrix fixtures were the main source of downstage wash. The 5 by 5 matrix panels, with their continuous rotation and 4-degree beam from each lens, made other looks possible as well. “They really did double duty,” Guest explained. “We would use them as wash lights and then turn them around to face the audience as an effect light.” Graphics and visuals on the Hard Stage were run across LED screens made up of Elation EPV375 HO™ transparent LED video panels, along with 7 mm LED panels.

While on the Pink Stage, Platinum FLX and Platinum Beam 5R Extremes were again used to provide stunning thick beam looks while fully rotational ACL 360 Bar colour-changing LED battens, mounted on a circle truss over the audience and dance area, kept the atmosphere fresh. “The ACL 360 Bars also allowed us to get multiple uses out of one fixture,” Guest said. “Besides washing the audience and extending the colour scheme out into the crowd, they were used to keep the energy high on the dance floor with a variety of dynamic colour and segmented effects.” Design Wash 60 LED moving heads were also used on the Pink Stage for added colour and effect while backdrop video screens made up of Elation 20 mm EVLED 1024T LED panels displayed eye-catching video and graphics.

Southern California has always had a bustling rave scene and by all accounts Hard Summer has retained its place as one of the region’s top summer EDM events. The venue may have changed but the quality of music and production has stayed constant.