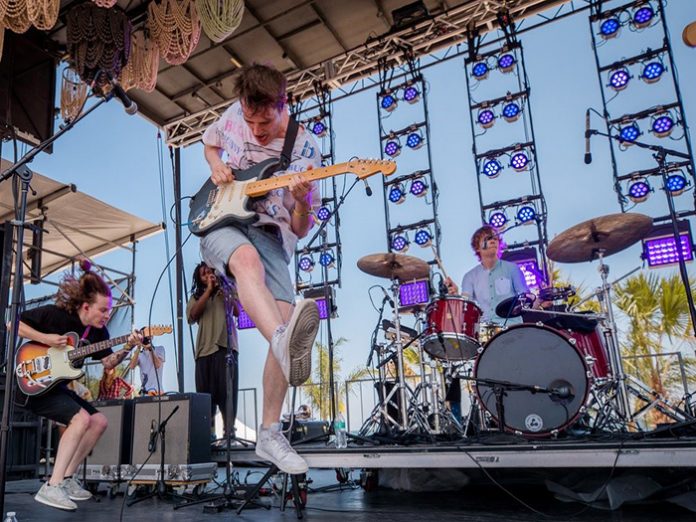 Nearly 40,000 music fans gathered in Gulf Shores for Hangout 2018, an annual 3-day music festival that Bandit Lites of Nashville has provided lighting for since 2014.

Bandit Lites’ Dizzy Gosnell designed the festival lighting packages for the Hangout Stage, Surf Stage and Beach Stage. Gosnell created a fittingly wavy, 3-truss rig on the Surf Stage that mimicked the rolling waves of the nearby surf. To emphasize the shape of the system both day and night, he outlined the truss with 26 Elation Professional SixBar 1000 IP color-changing LED battens along with 13 LED-based Cuepix Blinder WW2 white light blinders, all aimed at the crowd and used as audience lighting.

In addition to the 3 stages, Bandit also supplied packages for some of the artists, including Logic and The Chainsmokers. On The Chainsmokers’ set, Elation Professional Paladin hybrids were mounted onto 4 truss towers, 2 either side of the rear riser, with all the heads pointed downstage. The hybrid fixtures were used as blinders, strobes and eye candy, and also served as safety lighting in the event of an evacuation (Bandit furnished each stage with enough static audience lighting so the crowd could see safely in case of extreme weather). The Paladins were mounted inside Bandit’s GoGo truss with wheels on the back so they could be deployed and struck quickly during changeovers.

“Hangout is the official start of the festival season for us and always a blast to be involved with. There truly is not a festival like it,” Gosnell concluded. “The gear all performed exactly as spec’d and handled the one storm we got on the Thursday night admirably.”