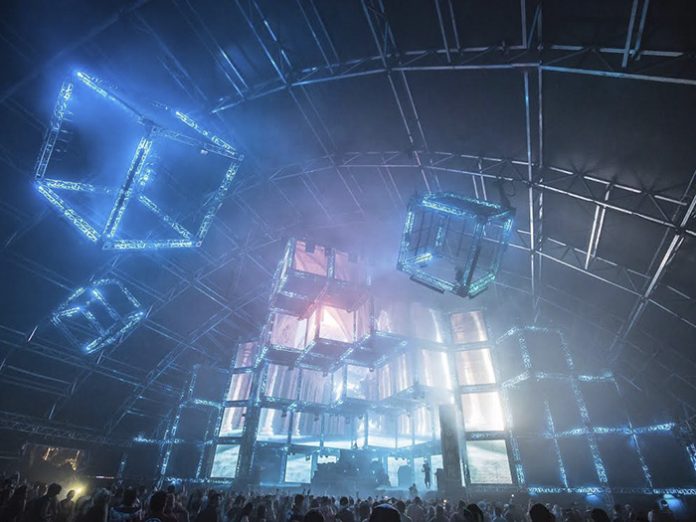 Elation lighting has been a staple of Coachella shows over the years and again this year played a large role in the visual experience with over 500 Elation products in action in the Yuma, Sahara and Mojave Tents, as well as around the festival grounds. Felix Lighting and AG Production Services supplied the Elation lighting gear.

Dance music fans congregated at the massive Yuma Tent, a nightclub-styled setting where world-class House and techno acts performed beneath a lighting rig designed by production and lighting designer Steve Lieberman of SJ Lighting, the man behind seminal designs at top music events like Ultra Music Festival and Electric Daisy Carnival. Here, 66 of Elation’s compact ACL 360i beam fixtures, supplied by Felix Lighting, were scattered throughout the Yuma Tent ceiling, lining the ribs of the structure and alternating with larger discharge source profile fixtures.

“We wanted a fast fixture that would keep up with three days of electronic music,” Lieberman said of the small beam fixture with single 60W RGBW LED, narrow 4° beam and continuous 360-degree rotation. “I wanted a new fixture with a new look and the fast movement and continuous rotation of the ACL 360i gave us that.”

His first time using the unit, he used it for high speed looks and transitions and used enough of the fixtures that it made for a high density, full look in the tent. “The narrow beam worked well with the room’s high ceiling,” he said. “It also has good colour mixing and good dimming. They were a good complement to the profile units and a great match for the room.”

Measuring a tiny 8.7-inches long by 7.3-inches wide by 13-inches high and weighing only 11.5 lbs, Lieberman added that the fixture’s small profile fit in well with their ethos to “hide everything in plain sight”. He stated: “When they were off you didn’t notice them. They have a very low profile, are small in size, and the black fixture on a black background allowed them to hide in the ceiling. There were also weight restrictions for the structure and the fact that they are so lightweight was also a benefit.”

AG Production Services provided the mega structure enclosure, rigging, staging, video and lighting for the Sahara Tent, Coachella’s home for electronic music. The design was led by AG Production Services’ Koen De Puysseleir and Andrew Gumper, who worked to transform the mega structure enclosure into an intimate setting using 3D cubes and squares built with truss, video panels and edged with lighting fixtures. “The goal of our design was to make the Sahara tent feel more like a high-end night club versus a large temporary structure with a stage,” said De Puysseleir. “With the wide range of music genres that performed in the Sahara Tent, we wanted a versatile, yet visually stimulating experience that would bring the audience closer than ever before.”

The Elation gear in the Sahara Tent was incorporated into every element of the design. Used to outline the 3D cubes were 36 of Elation’s six-foot Colour Chorus 72™ LED batten wash lights, each housing 288x 3W RGBA LEDs, while some 382 compact Opti Tri 30™ RGB PAR lights toned every piece of truss in the rig in shades of warm colour. Over the stage for punches of bright white light were 26 Elation Cuepix Blinder WW4™ effects, each with 4x 100W warm-white COB LEDs. Felix Lighting also supplied Cuepix Blinder WW4 fixtures for the Mojave Tent.

A highlight of the Coachella grounds this year, and one that received much praise, was the uplighting of the festival grounds’ many palm trees. Felix Lighting used Elation Colour Chorus 72 LED battens to light the palm trees in reds, blues, and greens with shades of purple projected as a tribute to the artist Prince, who passed away prior to Coachella’s second weekend.

Robe Gets into more panto madness