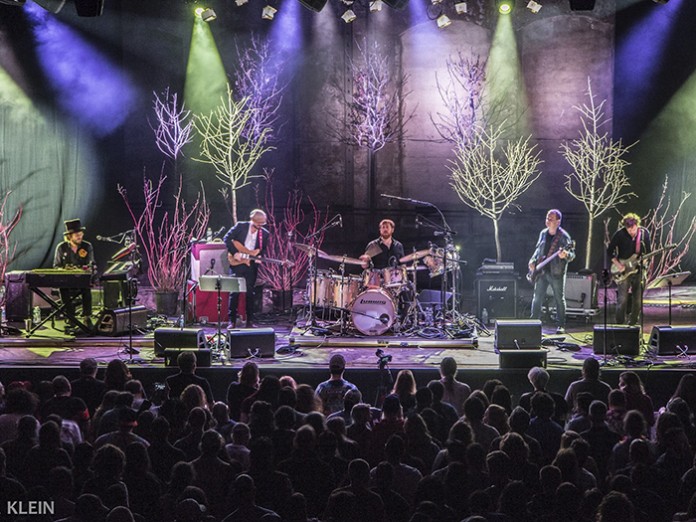 “It occurred to me that I needed to have more options to create unique textured looks,” Jason explained his decision to use the new generation digital light. “I needed a video element that was not too literal and could be hidden within our stage and set design. I needed a digital moving light projector that I could control from my console. The Emotion was very easy to drive!”

The Emotion is Elation’s new plug and play DMX moving light with an on-board media server developed in co-operation with High End Systems. Utilising only 32 DMX channels, and 54 in extended mode, it houses royalty-free digital art and videos with the ability to upload custom content.

“With no time to create custom gobo’s I knew I could have everything I needed and more within a moving head digital projector,” Jason commented. “The Emotion has plenty of built in rotatable gobo’s and video content crunched down to 54 channels! And at 4000’s lumens, I had plenty of firepower for the size of stage. It also acts as a standard moving light with CMY colour mixing. This is huge and although I did not use this option for my needs, I look forward to exploring this more down the road.”

Joe Russo’s Almost Dead, who mostly cover Grateful Dead songs, played a monster electric and acoustic three-set performance that took the crowd into the New Year. The Emotion lights were tucked out of site behind a set of legs and used to project content onto a sharkstooth scrim as well as trees and shrubs built into the sets.

“I was able to create some subtle breathing effects on the trees and go to a ’60s psychedelic time warp for one song,” Jason comments. “The Emotion was just the right fixture for us. These lights are small and don’t weigh much. I would recommend this light to anyone in need of adding some layer to your show with a unique fixture that has endless creative opportunities.”

Elation rep firm Healy Sales sees great potential in the Emotion and was instrumental in making the Emotion available for the New Year’s Eve gig. Scott Jolliffe of Healy Sales, added, “The Elation Emotion is an exciting new product incorporating digital projection into a compact and cost effect moving head. The response on this technology has been incredible and I’m excited that Jason was able to experience it firsthand. We feel the Emotion is a tremendous addition to the Elation family for 2016.”