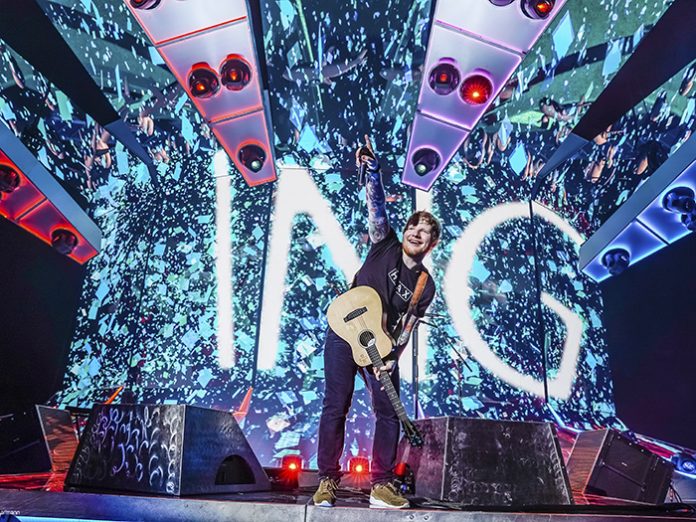 Ed Sheeran has always enjoyed huge popularity, but with Divide having dominated the international album charts since its release and the tour selling out the instant dates were announced, it has never been higher.

The tour began in Italy in March, travelling to Switzerland, Germany, Sweden, Denmark, Netherlands, Belgium, France and Spain before heading to the arenas of the UK and Ireland. It has worked its way round South America, Central America and Mexico in May and June, then back to the UK before heading over to the US.

Chris Marsh, Sheeran’s Production Manager, as well as FOH and Monitor Engineer, has been with the singer for six years and has an intimate understanding of what he wants and needs. Sheeran has been using Sennheiser microphones from the very start and switched to Digital 9000 during his 2014 US tour for his vocal, loop vocal and guitar.

“We had Ed’s guitar on a cable and DI for four years, because I simply couldn’t find a wireless system that gave us the sound that we needed to deliver his performance,” Marsh explained. “On first listening to the 9000 system, we discovered it was the most transparent sounding system we had ever heard. We were only meant to be checking it out on a soundcheck, but Ed and I both agreed we had to use it that night, and we have ever since.”

“For the loop vocal I use an MMD 945 super-cardioid capsule,” said Marsh. “As this vocal gets looped and repeated throughout the songs I can’t risk there being too much background noise, so the tight pickup of the 945 is perfect.”

“Ed’s main vocal is a cardioid MD 9235 dynamic capsule which captures a lot of detail. Importantly, it copes very well with being handled heavily and cupped a lot, which is Ed’s style. I use the Sennheiser 2050 wireless in ear monitors as they are rock solid, which is all that really matters to Ed.”

“Sennheiser has a long-standing relationship with both Chris and Ed,” said Jack Drury, Artist Relations Manager for Sennheiser. “We’re delighted that Digital 9000 has proved to be the perfect choice for him, both in its performance and its robustness for his demanding tours.”

“Sennheiser has been very supportive of us,” Chris concluded. “There have been times where we could not ship our rig, or were flying in to perform one-offs and they have always helped me source the equipment I need and been on hand for technical support 24/7.”
www.sennheiser.com