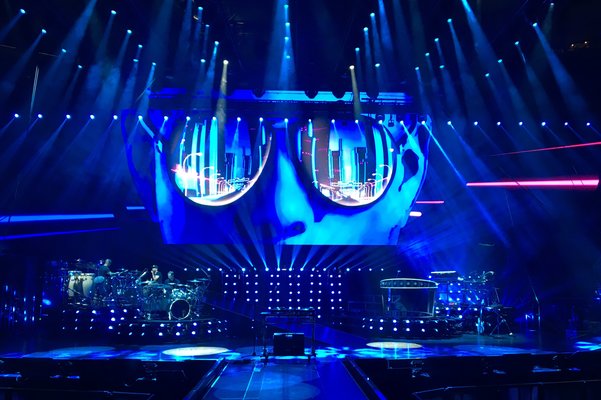 While both singers use an abundance of DPA microphones for their performances, the decision to use DPA was made by each of the singers’ sound engineers. Enrique’s Monitor Engineer Eddie ‘El Brujo’ Caipo and FOH Engineer Brad Divens chose the DPA microphone. Pitbull’s FOH Engineer Will ‘Chilly Willy’ Madera was also impressed when he heard DPA’s sound quality, introducing nearly 60 DPA microphones to the tour.

“We’ve been with DPA for a little over a year and realised right away how amazing they were, with DPA, we found that natural sound we were looking for. For that reason, we only use a minimal amount of equalisation to tailor the sound of the instrument, not the microphone,” El Brujo said.

“On the previous tour, we introduced the d:dicate 2011C and d:vote 4099 on percussion with incredible results. Then, we tried the d:facto 4018 capsule on our background singers, and Brad and I were blown away. It eliminated about 40 percent of the percussion leakage. On this tour, we were determined to have Enrique try it as well. The results could not have been better. Enrique loved the mic and so did we. From a monitor mix stand point, it cleaned up his mix considerably, as well as made his vocal balance in his mix more focused. From a FOH stand point, it removed the ambient noise and allowed Brad to have Enrique’s vocal sit in the mix without a lot of extra processing involved,” El Brujo explained.

Madera was introduced to DPA after a visit from company Sales Director Leonardo Romero at his studio.

“My first experience with DPA microphones was in late 2016 for Pitbull’s Time of Our Lives Las Vegas residency. I fell in love with DPA and the natural sound it brings immediately. Our second experience was in my studio for Pitbull’s 2016 New Year’s Eve Revolution recording where I used all DPA microphones to record. Since that day, I was hooked. DPA has helped me create the sound I have always looked for,” Madera recalled.

“Using the d:dicate 2011C on the kick drum brings a certain air and punch that you feel right away. The d:dicate 2011C on the snare brings a different characteristic and warmth to the sound that really cuts through the mix. The d:vote 4099 is my secret weapon on percussion. On congas, it gives me the true dynamics of the instrument with only a high pass. The band noticed an immediate change with DPA. Mixing and matching the microphones, I was able to achieve a true, impactful sound,” explained Madera.

“Even though they are surrounded by pyrotechnics and flames, our DPA microphones perform flawlessly night after night,” said El Brujo. “I couldn’t imagine using anything else.” he concluded.