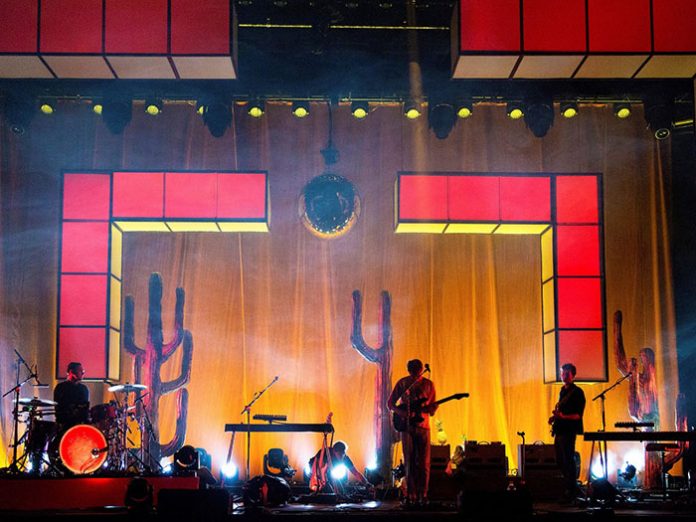 Front of House Engineer Pete Johnson is loving DPA’s d:facto Linear Vocal Microphone, which he is using on the current Glass Animals tour. “It’s absolutely great,” he said. “At points in the set Dave Bayley – Glass Animals’ vocalist – often sings quite softly while at the same time we want the show to be big, punchy and powerful. The d:facto Linear has excellent feedback rejection and lets me keep the amount of surgery I need to do to a minimum – always a bonus. We’ve used it in all different settings too, from tiny clubs to football stadiums. It’s taken all the stress out of achieving a solid vocal sound.”

Johnson has been a FOH engineer for 15 years and has worked with an impressive list of artists including Bonobo, Coldcut, Laura Marling, Leftfield and Django Django. He’s been mixing Glass Animals since May 2016 and is currently touring with the band whose live schedule takes them through the end of this year. “I started working with Glass Animals when they needed someone for their second album tour,” he explained. “They had enjoyed a Bonobo festival show that I had mixed a couple of years back. Listening to their music and then meeting them we realised we’d be a good fit, both sound-wise and personally.”

An English indie rock band from Oxford, Glass Animals released their debut album Zaba in June 2014 as the first release on producer Paul Epworth’s label Wolf Tone. Their second album How To Be a Human Being was released last year to critical acclaim and the band have since toured internationally including appearances at festivals such a Glastonbury, Coachella, Bonnaroo, Lollapalooza and Bestival.

Johnson specified a d:facto Linear Vocal Microphone for the tour after experimenting with a number of different microphones and realising that the d:facto best suited Dave Bayley’s voice. “I had previously used and really enjoyed the original d:facto but switched to the Linear version after DPA’s UK distributor Sound Network lent me both the original and the Linear for a few shows. The Linear mic just suited Dave’s voice that bit better. I’m also a fan of boosting really high frequencies rather than cutting if I do have to EQ – the boost takes the air up with it, rather than closing it in.”

As well as being the main vocalist, Dave Bayley is also Glass Animals’ songwriter/producer and an excellent engineer in his own right. “He has a great ear and could be a brilliant FOH mixer if he fancied it,” Johnson noted. “Over the years he’s tried many different vocal mics and is very happy with the d:facto Linear.”

Although Bayley is incredibly mobile on stage, Johnson is using a wired version of the d:facto because he and the band prefer the aesthetic of a wired mic. “Dave often takes off around the venue and into the crowd mid-set and has to be reeled back in, but the d:facto has proved really hardy and we love it,” he said. “The audio quality is fantastic. In live sound, and especially with a softer singer there is always going to be a level of stage spill from drums, etc. Some vocal mics have responses that cause spill to really interfere with what I’m aiming for from the other instruments. Spill down the d:facto Linear sounds great.”

The Glass Animals tour also incorporates DPA d:vote 4099 Instrument Microphones, which are being used on toms. These are working so well that Johnson is hoping to add more soon to cover the rest of the drum kit. “My first experience of DPA microphones was some years ago when I used d:fine 4066 Headworn Microphones for theatre and corporate work for various PA companies,” he said. “I have always used d:vote 4099s on strings and woodwinds too – nothing else I’ve tried works as well. For the finale show of the Bonobo North Borders tour at Alexandra Palace we had around 20 string players, all on d:vote 4099s. That was an absolute joy.”