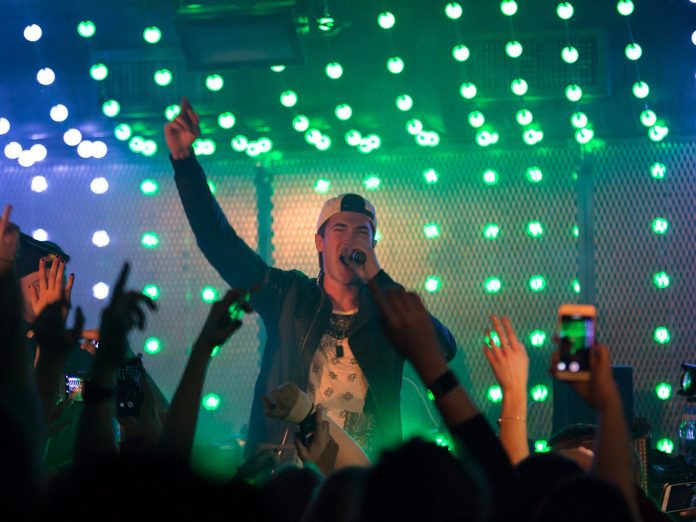 Mark Portlock had no hesitation in recommending an award-winning DPA d:facto Vocal Microphone when he was asked to handle Front of House duties for US pop duo Timeflies who recently undertook their first headline European tour.

Formed in 2010, the band is best known for its YouTube covers and its original music, which combines elements of hip-hop, pop, electro, R&B, and rap.

Portlock said that microphone choice was very important to the success of Timeflies tour. There were 16 venues on the agenda ranging from 200 to 1200 capacity. In some of the smaller venues the PA was often flown close to the stage, which added to the challenge of delivering consistent ‘produced pop’ with ‘sugar sweet’ compressed vocals and clean intelligible rap.

“The microphone choice was crucial as the band was exclusively on IEMs,” Portlock explained. “The first challenge was to achieve a constant and stable level from the vocal, which is not as easy as it sounds when the artist (Cal Shapiro) is moving around directly beneath small PA systems, in the crowd and occasionally jumping from the DJ table! Cal also loves to cup the mic when he raps and he frequently sings off axis and points the mic out over the crowd. The d:facto Vocal Microphone was the ideal choice for him because it gave me great pattern control, while the colouration on the mic from ambient noise was much sweeter sounding and natural than other high end vocal mics around.”

Timeflies’ tour took place in the Netherlands, Belgium, Denmark, Sweden, Norway, Germany, France and the UK. As the budgets were tight, Portlock elected to use in-house consoles and invest his cash in a stage package that included radio mics, IEMs, DIs and power distribution – all supplied by West London rental company Encore PA, which also has a large stock of DPA microphones.

“The show audio comes predominately from the DJ set up comprising Serato-based stems played back and mixed live by multi-instrumentalist Rob Resnick who also plays guitar, percussion and piano during the show,” Portlock said. “Unlike a lot of pop shows there are no lead vocals on the stems – it’s all live. The only exception was Katie Sky’s vocal on the global hit Monsters. This anomaly was rectified at the second sold out London show where Katie delighted fans by making a surprise guest appearance to deliver the hit live herself.”

As Timeflies is effectively a pop act, Portlock treated the microphone differently to a normal rock vocal.

“Firstly, there was plenty of EQ to stabilise the sound between Cal’s rapping and singing,” he said. “Then there was a lot (and I mean a lot) of compression and make up; sometimes up to 20:1 with 12db with the vocal slamming hard into the compressor throughout much of the show. Two reverbs, pitch change and delay were also added and heavily equalised, then applied in layers to achieve the dynamic and right up front ‘poppy’ vocals required, while the harder edged rap vocal sat further back in the mix allowing the live tracks to provide the dynamic range in the show. It was a little backwards, I know, but the band and management loved the results. Everywhere we went the in-house audio guys commented on the quality of the sound and many were surprised at the overall volume and density we achieved from small PA systems and often under the oppressive thumb of many EU noise limits, some as low as 91dba peak!”

Portlock has used d:facto Vocal Microphones on many previous occasions and particularly likes them for artists who have quiet voices and/or wide dynamic ranges. On this occasion the band’s musical style was very different from the bands he usually tours with but he was still impressed by the results the microphone delivered.

“I had a great time with the d:facto – its ruggedness never fails to amaze me and it performed faultlessly with my Shure wireless system,” he said. “It will be back on tour with me over the summer when I do festival duty with Misterwives and Timeflies.”