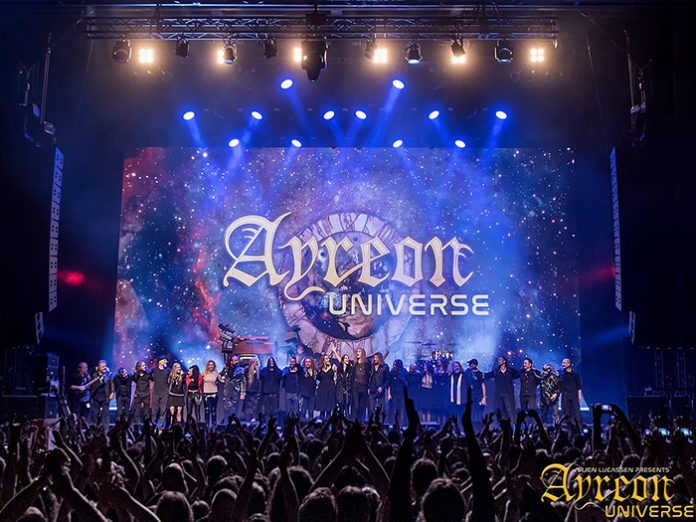 FOH Engineer Niels Jensen described DPA’s d:facto Vocal Microphone as ‘flawless’ after he deployed 18 of them to amplify the singers in a unique stage show, Ayreon Universe, which was performed over 3 nights at the 013 venue in Tilburg, Holland.

“I absolutely love these microphones,” Jensen said. “Even with so many singers in such close proximity to each other I had no issues at all with bleed. The phasing was out of this world and the sound was so clean, I couldn’t have wished for anything else.”

The progressive metal/rock opera Ayreon Universe is the invention of Dutch singer / songwriter and multi-instrumentalist Arjen A. Lucassen. The performances in Tilburg marked the first time Lucassen had staged the rock opera live and there was huge anticipation amongst his fans. The whole project took over a year to come to fruition and was masterminded by Lucassen and his Musical Director Joost van den Broek. At each performance, Lucassen was joined on stage by 17 original Ayreon singers (including backing vocalists) and a hand-picked band of 8 instrumentalists.

Jensen’s role was to coordinate and manage the audio team, which consisted of second FOH Jos Driessen; Monitor Engineer Gino Krishnadath; Freek de Greef, who looked after Wireless Systems; and Recording Engineer Dave Schinkel. Recognising the importance of these performances, Jensen chose DPA microphones for the task. There were 18 wireless d:facto 4018V Vocal Microphones used for the singers. To pick up the sound of the drum as naturally as possible, Jensen close-miked the snare drum; using a d:facto 4018VL Linear capsule with a MMP-ES preamp mounted on a GSM4000 Gooseneck Mount and a d:vote drum clip. For the same reasons, he also used this solution on a high Leslie. He commented: “With this capsule we had nil bleed from the hi-hat or cymbals, where usually this can be a big issue to deal with.”

He also specified DPA d:vote 4099 Instrument Microphones and a selection of d:dicate 2011 Twin Diaphragm Cardioid and 4015 Wide Cardioid microphones to capture a range of instruments including drums, Leslie, digeridoo, flute and percussion. All the microphones were supplied by Amptec, DPA’s distributor in the Netherlands.

“The d:dicate 2011 microphones were used for kick drum, hi-hat, ride, snare bottom and bottom Leslie because they deliver sound straight from the source and with great clarity,” he added. “For the rack toms and floor toms we used d:vote 4099 Instrument Microphones because they offer great linear response. They are honest and give you the true tone of the source. We also used d:dicate 4015s as overheads because their wide pick up perfectly captured the overall drum sound. We had 88 inputs in total with all the tracks and ambiances for recording included. Sound quality was the main reason why I chose DPA microphones for this project and I wasn’t disappointed. The microphones integrated flawlessly into the Ayreon Universe setup and they all sounded amazing with hardly any EQ going on.”

Jensen first started using DPA microphones a couple of years ago when he was introduced to the d:facto Vocal Microphone. “I loved the d:facto from the first moment I came across it,” he said. “The sound was so good that I immediately bought one – as did Anneke van Giersbergen, the artist I was working with at the time. They are so defined, and you have no crazy proximity effect to deal with. The low handling noise is great, too – wind gets no chance! I also like the fact that no phasing ends up in your mix. This is something everyone struggles with and the d:facto solves that for me.”

It was Jensen’s satisfaction with d:facto that inspired him to also use DPA for the instrumentalists taking part in Ayreon Universe, particularly the drummer. Jensen concluded: “We had an incredible drummer in the shape of Ed Warby on stage and I felt that his drums would sound great with DPA’s as well. From the first soundcheck I knew we had made the right choice because Ed’s drums sounded so lively and detailed. Overall it was like taking studio quality sound to a live show and that was really impressive.”

FLUX:: and L-Acoustics lead ADM-OSC standardisation for object based audio