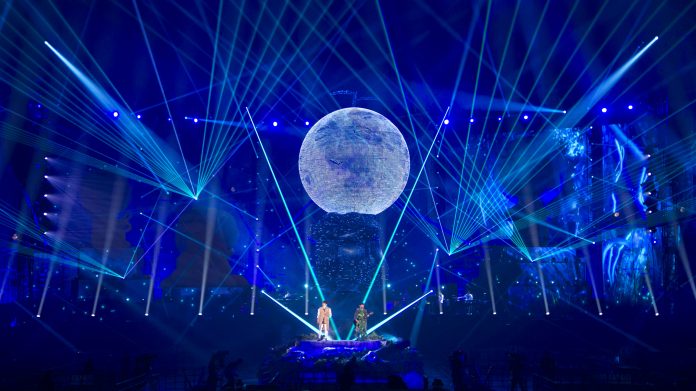 Japanese folk-rock duo Yuzu are celebrating their 20th anniversary with a tour across Japan, featuring a unique LED-clad stage show.

The band’s set involves huge back wall of LED screens of assorted sizes and shapes and a giant sculptural Yuzutaro LED – an anthropomorphic character whose head is fashioned from the Japanese citrus fruit called yuzu. Disguise (formerly known as d3 Technologies) 4x4pro media servers were chosen to unify the different feeds needed to push content to the LED back wall, the sculptural Yuzutaro LED plus the stage riser LED.

“We have used Disguise extensively in the past so we knew it would be the best option,” said Roy Chung from Los Angeles-based content creator, Possible. “The biggest challenge for us was figuring out the ambitious sculptural Yuzutaro LED that was the central fixture of the stage show. When show director Ijitsu Hiroaki of Show Design, Inc. first presented his concept to us, we knew there would be significant technical challenges but were excited by the creative opportunities afforded by this unique sculpture.”

The Possible team worked with several different partners in Japan and the US to realise Yuzutaro, which is over 15 meters tall and has 100,000 hand-placed LED bulbs. “We spent several weeks getting the mapping right, and Nihon Stage and Sanko worked tirelessly to finish fabrication and LED placement, respectively,” said Chung. Sculptural Yuzutaro has an LED pitch of about 70mm. The LED back wall is a mix of 30mm and 18mm pitch products.

“The tight production schedule meant we would not have very much time with the sculpture itself, so the visualiser was indispensable for testing if our content was actually sticking to the sculpture correctly beforehand,” Chung explained.

“When we arrived in Tokyo for technical rehearsals, all that early groundwork we laid meant we only had to do a bit of dialling in on disguise with the help of the programming team from disguise Rental Partner, Hibino Corporation. When we saw Yuzutaro light up for the first time, I think everyone felt all the sleepless nights were worth it!”

Hibino provided 3 4x4pros: the 1st was the main timecode system, the 2nd was the timecode back up and, while the 3rd was a DMX-controlled unit for flexible use. “We ran the show with timecode most often, but some parts are run with the grandMA2 controlling the grand master and switching the camera feeds and content,” explained Naoki Ogawa, who handled the disguise project set up for Hibino. “We also mapped the camera feeds using the parallel map [treating] the randomly configured LED walls as one big LED wall.”

Ogawa concluded “Since the show has a 30-minute medley we used version control. With that feature the content creator doesn’t need to re-render 30 minutes of footage every time. They just have to re-render the part they need to change.”

The disguise operator from Hibino is Toyokazu Fujisawa; the Video Director is Tatsuro Ogawa from Orange Collar; while Hiroaki Ljitsu was the Show Director – show design and additional content was created by P.I.C.S in Tokyo, Japan.