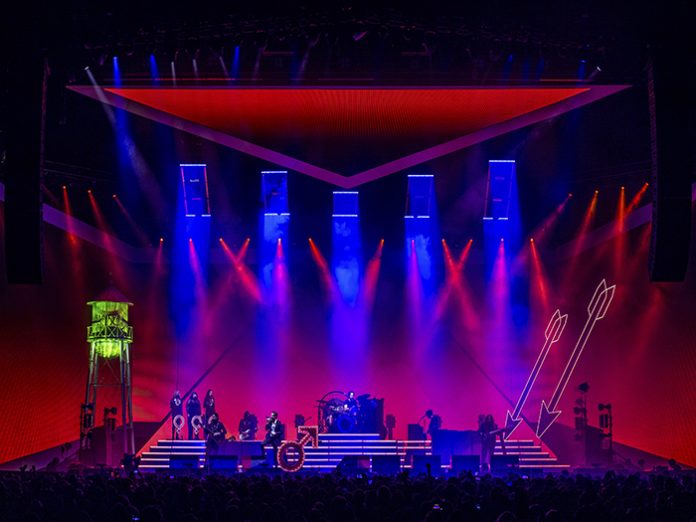 The video-intensive set featured 2 giant pyramidal display surfaces upstage as well as screens that wrap around 3 sides of the stage. “The band was considering ideas for a new look, and large-scale video was something we hadn’t done on previous tours so it seemed an obvious way to go,” said Lighting/Laser Designer and Creative Design Consultant, Steven Douglas. “It also gave us lots of scope to change the stage on a song-to-song basis by altering the number of video surfaces we used.”

“A number of the disguise features were seen as advantageous to the show,” added disguise Programmer, Dan Gentile. “Its mapping features have definitely been a huge advantage, as are its ability to change surfaces, as we bounce between our own show with a complete rig and festival setting shows, and coming ready to run Notch blocks.”

Douglas agreed: “The versatility of the disguise system made it the obvious choice. We knew we wanted to do more with Notch effects so the seamless integration of the 2 systems was a big plus. Our Production Manager, Michael Oberg, had brought video vendor Big Picture on board for this tour, and they were also very keen to use disguise.”

disguise Programmer Dale Rehbein reiterated the “Swiss army knife” capabilities of the system and also cited “the ability to utilise multiple devices to trigger content playback and the flexibility to handle the large forced perspective canvas as one or as discrete outputs.

“The system also allowed me to provide content creators Blink-TV and Moment Factory with the correct pixel templates,” Rehbein added. “The biggest stumbling block for this project was how to create the upstage center pyramid. Aside from the engineering of custom 45° / diamond frames by ACASS Engineering, the challenge was maximising the output raster, plus gaining 45° rotation from the 2x4pro to an LED processor without any rotate function. By treating the LED screen as a projection surface and rolling the projector output I was able to satisfy my overall concerns early on. Once the feed map was cut up for the 1920×1080 feed to handle the pyramid within the constraints of the LED processor, I was a lot happier about pushing on.”

Gentile found the Sock Puppet feature to be “incredibly useful on this tour as control of disguise is split between me and Steven, who is able to toggle different parameters on and off. Setting different attributes to a DMX channel that it wouldn’t normally default to was key to getting everything integrated with lighting.”

He added: “The media server has pretty much been a non-issue the entire tour: Every idea or question has been met with a quick solution within the software, and considering how powerful disguise can be it certainly is intuitive in its layout making changes with ease.”