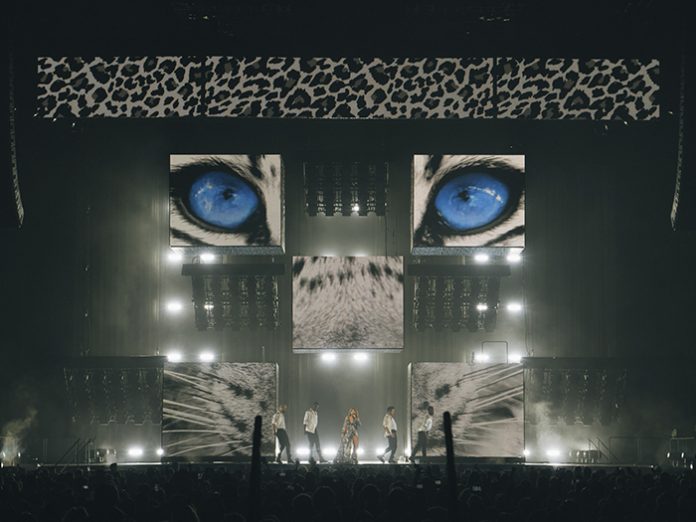 “The shows video canvas is based around 5 12-foot moving video cubes covered with a total of 18 LED surfaces; a large header screen; 5 LX pods with seven surfaces on them; a projection scrim; and 2 portrait-mode IMAG screens. We have a total of 29 separate video surfaces,” said Tom Colbourne, owner of Blink, a content studio and production company based in Burbank. Blink designed and produced all of the screen content for the tour with Colbourne serving as Video Content Director.

“The brief was to make something that could be reconfigured,” said Creative Director and Production Designer Rob Sinclair. “Shania wanted the audience to not know what was coming next and for the band and dancers to continually appear in unexpected places. She often referenced ‘Jailhouse Rock.’”

“We took Rob’s initial references and developed them into screen content designs for all 22 songs,” said Colbourne. “For a video canvas like this, the formatting and mapping needs to be part of the design process, not an afterthought. So disguise was key to the design development as we refined the content with disguise Programmer and Notch Integrator Brian Spett during the programming phase.”

Colbourne explains that Technical Director Richard Cullen and Brian Spett “worked out a series of different output maps, and disguise allowed us to effectively choose which map worked best based on the creative needs of that song. It was refreshing to have the creative and practical needs lead the technical solutions rather than the output maps restrict what we were able to achieve.”

A disguise 4x4pro was chosen for two main reasons, according to Spett: “We needed real-time flexibility with different mapping presets. We knew there would be times when it would look best to ‘project’ the content across the entire canvas, and disguise has a great tool for this. Shania wanted the flexibility to sometimes embrace the cubes with meticulous mapping and clever formatting and other times treat the stage as one big canvas.”

Secondly, “disguise was a vital tool to help us ensure cohesive integration of IMAG looks and screen content,” said Colbourne. “We knew we wanted to layer in content background looks into the IMAG feed. So during the first section, which is a kind of Pop Art evolution, we rendered various layers from our main screen content looks and used them as ‘treatment layers’ for the IMAG… We teamed with Silent Partners Studio to create the Notch looks under Rob’s creative direction.”

Spett adds that the  disguise 4x4pro also has the ability “to easily output the four LED and six projector outputs plus Notch integration from a single machine.”

“I don’t think we had any other options except disguise,” noted Sinclair. “We had a lot of content and a lot of surfaces and needed speed and reliability.” Spett used disguise extensively during prepro, “the visualiser was a key tool in early discussions with content creator Blink,” he recalled.

Spett relied on a number of disguise features for the show. “MultiTransport is invaluable in this production,” he declared. “We have different transports for Base IMAG Looks, LTC Triggered Content and SockPuppet layers that allow the main show to run in the background but permit override ability from FOH. Although most of the show runs to timecode and jumps tracks automatically, we keep a MultiTransport open that allows for interstitial looks and a kiss-cam segment to be controlled from the grandMA2 at FOH. Setlists are used in conjunction with the MutliTransport features to keep the list of tracks that any transport can go between, helping to keep the system locked down and very organised.”