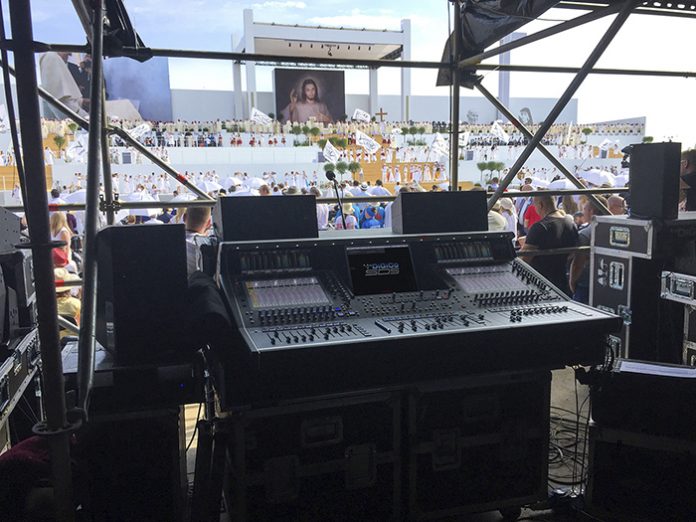 With over two million people attending, the day included an address from Pope Francis, prayers and concerts featuring a 100-strong symphony orchestra and a 300-strong choir plus soloists on the main stage, as well as various bands on the second stage.

“Three SD5’s were deployed at the main stage Front of House position,” said Krzysztof Polesiński who manned one of them, along with Arkadiusz Wielgosik and Andrzej Sterna. “We had one SD5 for orchestra, one for the choir, and a third for all announcements, the Pope himself, altar mics and instruments.

“The first SD5 had 112 channels coming from two SD-Racks. This console was for the live orchestra and a band of musicians. All effects and dynamic processing were purely on board processing, which really underlines their incredible quality and versatility.

“The second SD5 served the big choir and had 96 channels from two SD-racks. The third console was for channels used during the Holy Mass for the Pope, Cardinals and microphones used by those participating in the liturgy, which gave a total of 50 channels via a single SD-Rack.

“We had Waves servers on two of the SD5’s as we used a number of Waves plugins. For example, Pope Francis had a vocal rider inserted and to clear the crosstalk between a large number of microphones we used a Dugan automatic mixer.”

Three DiGiGrid MGBs were also utilised – two for recording and the third as a backup – recording 224 channels in total.

“All three consoles and the 5 SD-Racks were on an Optocore loop,” Krzysztof added. “This allowed the exchange of 56 input and output channels between the consoles. We selected the most important channels, for example the channel for Pope Francis’s microphone, and then mirrored them on all consoles, so that everyone had a backup.”

The team also found that the console’s Text Chat function was extremely useful for silent communication during moments that required absolute silence, such as parts of the liturgical Mass.

The next World Youth Day will take place in Panama City in 2019.