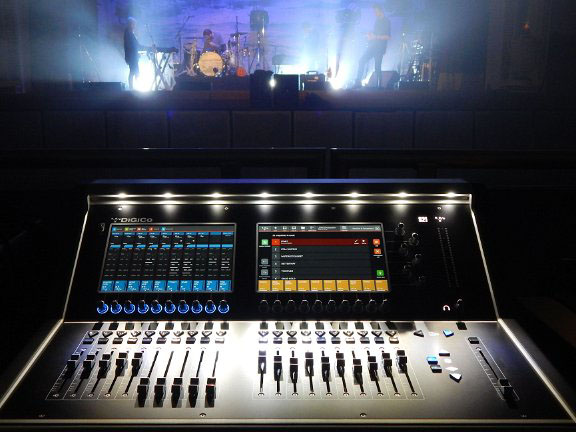 At the beginning of this year, Tom Chaplin, ex-lead singer of Keane, announced his intention to embark on a solo career. With an unusual list of venues and extremely limited space, DiGiCo S21s were the perfect fit for both Front of House and monitor positions in a series of intimate gigs to promote the new album, The Waves.

Simon Hall, Tom’s Monitor Engineer and Project Manager for Wigwam Acoustics, who supplied his S21, had worked with Keane for the past six years. Mark Littlewood became involved via Simon, who he has toured with on and off for almost two decades, and mans the FOH position with his own S21.

Mark said: “We did promo and TV shows prior to the tour, which ranged from radio station ‘acoustic’ shows to performances in German record stores. The eight-date tour in October took in a real variety of venues from churches, boats, music halls and comedy clubs.” Space limitations in such unorthodox venues were a major factor and all the backline and sound equipment had to fit into small vans and bus trailers, whilst load ins generally involved several flights of stairs.

“After evaluating small-format desks from a number of manufacturers, we knew the S21s were a no brainer because of their small footprint, light weight and reliability,” he recalled. “Also, a lot of the shows involved very limited time from arriving to performing and I had every confidence that the S21 would deliver and perform flawlessly first time.”

“Size was important,” added Simon, “But possibly more important was the quality for cost ratio, which is what steered it in the direction of the S21s in the first place. As this was a new project, the funds for promotion was limited, so the whole package had to be cost effective. The S21 came to market just at the right time for us to give it a run out and, as Mark had been using his with great results, it seemed the perfect fit.”

Mark has owned his S21 since last year and has added a SoundGrid card, with a DMI MADI B card handling the inputs from the D2 Stage Rack. “The whole package worked perfectly from day one,” he said. “The layout is incredibly simple and intuitive and I’ve never even looked at the instruction manual. The Set Spill feature is very useful, as Control Groups are always to hand no matter what page I’m using on the console. The set list for the tour changed daily and the ability to move snapshots easily around is a huge advantage.”

This was Simon’s first run out with the S21 and he has been more than happy with it. “Being a regular DiGiCo user meant all the terminologies were similar, even though the user platform on the S21 is different from the usual DiGiCo appearance,” he said. “There were a few things I had to get used to and a few things that you can’t do on the S21 that you can on the SD Range consoles, but you have to remember this is a lower cost desk and you can’t really expect the same amount of functionality. However, the internal UB MADI is a great thing and, like Mark, I like the way you can change the order of the set list.”

Mark commented, “Tom’s been impressed with the sound of the console at both FOH and monitors and I’ve never seen him looking stage-left at Simon – which is always an indication that things are going well.

“The desk has also generated a lot of interest from House Engineers, too, particularly when they realise that a DiGiCo console is now an aspiration they can afford. It still puts a smile on my face when I unmute the board for the first song. Its small size belies its huge sound.”

“The consoles have been perfect,” Simon concluded, with a smile. “The sound is great and you can get them into tight spaces where the bigger desks would struggle. The Tour manager has also enjoyed the smaller rental bills.”