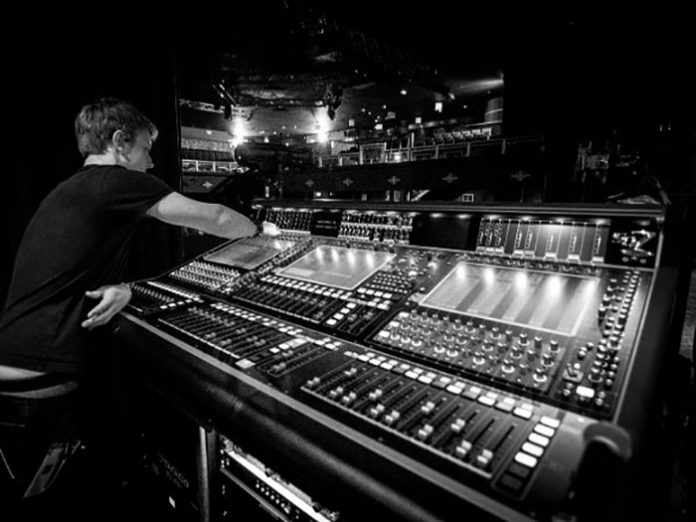 Double Brit Award-winning singer-songwriter, Rag’N’Bone Man, spent the beginning of this year touring the UK and Europe. With his ever expanding fan base, every academy-sized venue of the two-week UK section was sold-out and he claimed the number one spot in many of the European shows, with the summer festival season following on. FOH Engineer Rob Sadler and Monitor Engineer Jamie Tinsley have both deployed DiGiCo SD7s throughout, supplied by rental company Nitelites.

Both Sadler and Tinsley say that the SD7s are not a necessity for the tour, with input counts that could be handled by smaller consoles in the range, but they are very happy with the luxury the SD7 affords. The choice of DiGiCo, however, has specific reasons behind it.

With six musicians on stage – Rory, best known as Rag’N’Bone Man, and five backing musicians – a full drum kit, two bass inputs, six electric guitars plus an acoustic, a Nord keyboard, Rhodes piano, a Leslie and a playback system, Sadler and Tinsley can operate with one SD Rack each and the system is far from stretched.

At Front-of-House, Sadler has 40 inputs and two on-board effects. This does not use the SD7 to capacity, but makes life easier and has the benefit that files can be transferred to any other DiGiCo consoles. This is the main reason for the choice, as it provides flexibility in places, such as festivals, where they are not able to take in their own consoles.

“I’ve been a big DiGiCo fan for as long as I’ve been mixing high profile artists,” said Sadler. “I’m still relatively new to this tour and having a DiGiCo has made the transition easy for me. The DiGiCo lets me focus on mixing and not getting myself lost inside a new console. I enjoy how it sounds, too; it’s very natural and the Dynamic EQ available onboard the console means that third party plugins aren’t needed.”

Tinsley grew up on DiGiCo consoles, having used them for many years with other artists, and quickly learnt to love their speedy workflow and flexibility and has found the ability to put anything anywhere has greatly helped to speed up his mixing process.

“I haven’t yet found another console that does all the little things I want that make my life easier,” he said. “Everything for Rag’N’Bone Man has been kept relatively simple; it’s a straight up rock band with your usual I/O – drums, bass, guitars, keys, playback and a few vocals. We’re trying to keep the input list below 48 channels for ease when using other consoles on fly shows.”

Tinsley likes the power of the SD7’s macros and the number available has helped a lot with what, he says, seems like simple tasks, such as being able to hit a button and talk to any single member of the band to have a conversation on stage without disrupting other band members.

“Using Control Groups to physically change input send levels to mixes is great for keeping a level consistency between songs and to be sure you never overload inputs to IEMs,” he said. “For me, the Snapshots page is by far the easiest to use, giving me great flexibility when working with Scenes, and the metering above each screen is insanely useful for staying on top of your gain structure.”

Sadler and Tinsley’s DiGiCo experience has thus far been a flawless.

“I gave DiGiCo a heads up that I’d be joining the tour and I was sent all the technical support email addresses and phone numbers, which gives real peace of mind.”

“The DiGiCo team have been truly remarkable with their support,” added Tinsley. “Any questions I’ve had have been quickly answered, and their open-door policy for visiting the Chessington base has been very handy. It’s nice to always have someone that will pick up the phone when in need, too.”

“We’re are all very pleased with how the SD7 performs,” Tinsley concluded. “The ease of use, sound quality and durability make it the perfect choice of touring console, especially for mixing monitors!”