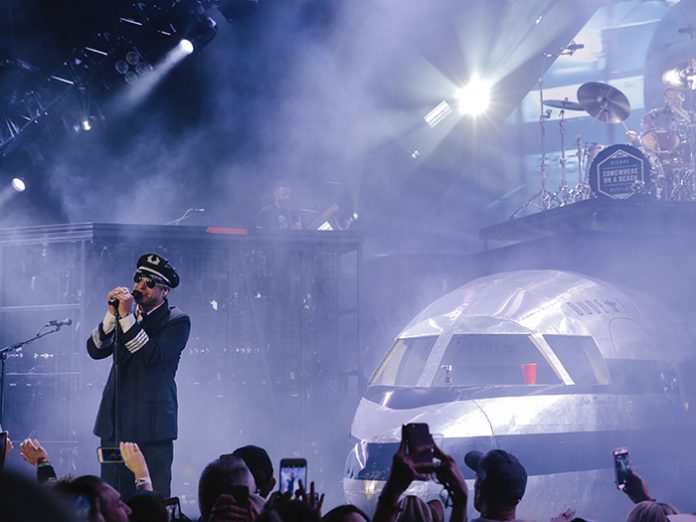 James ‘Pugsley’ McDermott, FOH Engineer for Deirks Bentley and System Engineer for VER, spoke about the sound on Bentley’s current Somewhere on a Beach tour at his most recent show at the Shoreline Amphitheatre in California. McDermott has been doing sound professionally for almost 27 years, and has been with Bentley for 11 years. On this tour, he chose to outfit Bentley’s show with a Meyer Sound LEO and LYON system.

McDermott was continuously blown away by the Meyer system: “It was incredibly transparent and it was effortless in what it was doing,” and was also impressed by the horizontal sub coverage. The system has given him the versatility to cover arenas ranging from 5,000 seats to over 17,000.

At the Shoreline Amphitheatre show, McDermott was particularly satisfied with the rig’s reach. “I could very easily leave the long delays off because it has that reach that I can throw it 500ft plus without really losing a whole lot of gain,” he explained.

The system includes a main hang of 12 LEO with four LYON-Ms underhung and six flown subs in cardioid. There are two stacks of two on the ground per side, 1100’s in cardioid, and then a dozen LYON-M’s for side hangs.  Eight UPA’s and eight UPJ’s round out the package.

“I’m able to accomplish dynamically much more effectively than I have with previous rigs,” McDermott continued. With its consistency and range, the rig was a perfect marriage with Bentley’s show.